RESPONSIBLE PUBLIC SPENDING ON THE WIZARDS: Do you know that the District is considering spending $50 million of taxpayer money on a proposed Wizards practice facility? It is being presented as an economic development catalyst for the St. Elizabeths campus in Ward 8, an area of the city that has not experienced the commercial real estate renaissance that neighborhoods west of the Anacostia River have in recent years. The $50 million—$23 million in District dollars dedicated to St. Elizabeths and $27 million of taxpayer funds allocated to Events DC, our sports and entertainment authority—is the estimate to build a practice gym with all the bells and whistles NBA players want, as well as serve as the home court for our WNBA Mystics and a concert venue.

But the cost might go higher than $50 million, and right now according to the proposed contract between Wizards owner Ted Leonsis and his Monumental Sports & Entertainment company; Events DC; and DC government; District tax payers would be on the hook for any cost overruns. I don’t think that is right, given the primary reason for building this is to help the Wizards recruit star players. A winning professional sports team is good for our city, but that needs to be balanced against other pressing capital needs like modernizing our schools, making sure our firetrucks and ambulances work, and having a safe and reliable Metrorail and Metrobus system. District tax dollars don't grow on trees, and $50 million isn’t a rounding error in our city's budget, as one of my colleagues put it.

Last Tuesday, I did two things to try to bring more budget discipline and transparency to our spending on this project. First, I introduced a bill with five of my colleagues (Brianne Nadeau, Mary Cheh, Kenyan McDuffie, David Grosso, and Anita Bonds) to set $50 million as a firm budget, and private entities such as Monumental can pay any cost overruns. Second, I filed a resolution that extends the time the Council has to review and approve the contract until April 7 so that we can hold a hearing to discuss risk factors that might cause the project to go over budget, how we can reduce them, and who pays if that happens.

My bill doesn’t kill the deal; it makes our expenditure on it clear and transparent. A Washington Post story is here, and a national story in the online sports magazine Deadspin titled Washington, D.C. Makes Sure No Billionaire Sports Team Owner is Left Behind is here. I highly encourage you to attend the hearing on March 24 in Room 500 at the Wilson Building.

If you can’t attend, you can submit written testimony to cow@dccouncil.us or by mail to the Committee of the Whole in Suite 410. The record closes at 5:00 p.m. on April 5. 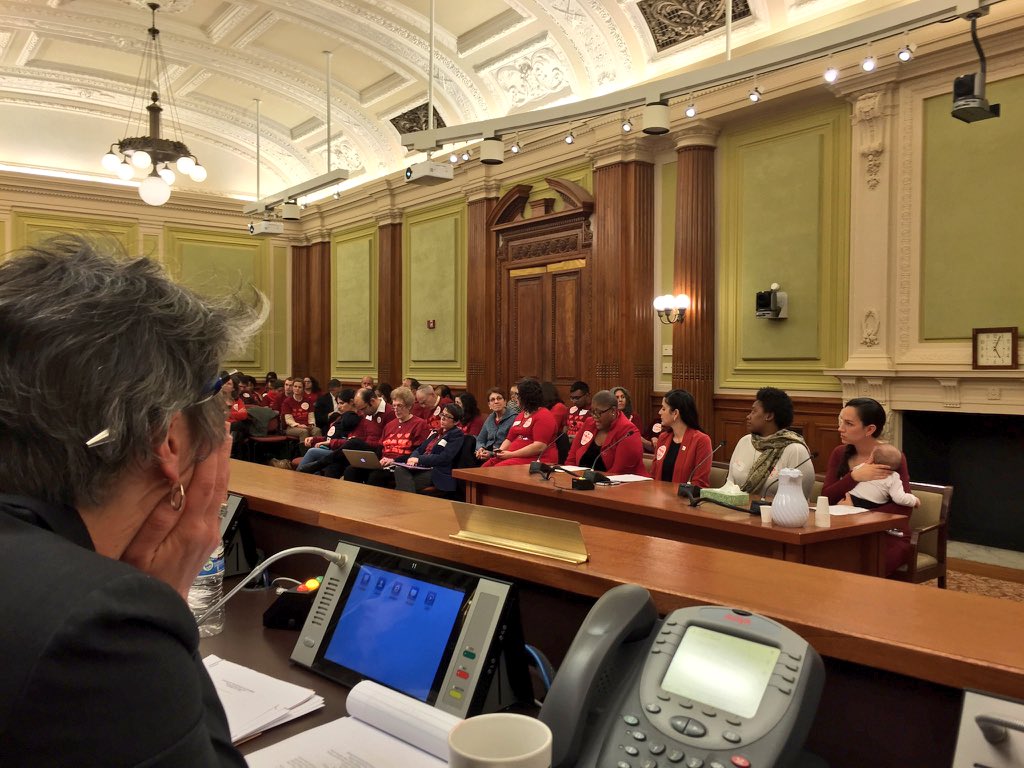 WHERE WE ARE WITH PAID LEAVE: Our Paid Leave bill has made enormous progress since being introduced last October. We’ve had three hearings over the last four months—the first for advocates, the second for expert and government witnesses, and the third for public witnesses. All of the hearing testimony is available online if you weren’t able to watch.

After the second hearing, Chairman Mendelson circulated a revised version of our bill as a discussion draft, intended to prompt more conversation on concerns that have been raised. 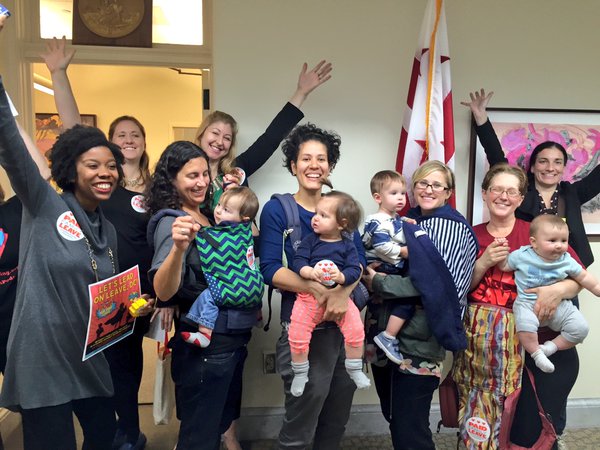 You may have read about it in the Washington City Paper. So what happens now? Now we are waiting for Chairman Mendelson to schedule a committee mark-up on the bill for Council members to discuss a final version, vote on any changes, and move the bill into the final stage. Our Paid Leave bill is making its way through our legislative process, but you can help move it to the next step by doing several things:

My primary focus continues to be making sure that no District worker is put in the heartbreaking position of not being able to afford to take leave to address a family or medical issue. I’m very optimistic that my colleagues and I will reach common ground, and that we will be offering a universal paid leave program in the District soon.

IMPROVING EMERGENCY MEDICAL SERVICES TO SAVE LIVES: Also getting quite a bit of news attention is the District’s Fire and Emergency Medical Services Department (FEMS). Over the past year, we’ve welcomed a new chief, addressed some serious missteps, and started to rebuild after the department's medical director resigned. When the Judiciary Committee held its FEMS oversight hearing last month, it was clear that reforming and strengthening FEMS has no quick and easy answers. Though I don’t sit on the committee, I will continue to prioritize FEMS as a vital department within the District—and with urgency.

I’ve met with Chief Gregory Dean twice and know his team wants to create the best FEMS department for the District. I fully support him in his efforts and have two primary updates on next steps for the department. First, we’ll begin seeing third party ambulance providers helping District residents, workers, and visitors with low acuity cases starting in three to five weeks. As Chief Dean mentioned in his Washington Post op-ed, this will allow our currently overworked, under-equipped providers an opportunity to receive new, higher-quality training more frequently. Second, we discussed changes in the way we measure departmental success and quality of service. Rather than focusing on how quickly ambulances are dispatched or how fast we get patients to the hospital, we will explore ways to work toward higher quality by focusing on patient survival rates and how effectively we were able to stabilize individuals in a medical emergency.

Real Property Tax Appeals Workshop: Many of you received your property tax assessment and estimated payment amount in the mail last week. I want to remind you that the deadline to file your initial appeal with the Office of Tax and Revenue is April 1! How is your assessment determined? How does the appeals process work? These and other questions will be addressed in a workshop this Thursday night at 5:30 pm at One Judiciary Square sponsored by the Real Property Tax Appeals Commission.

Free Politics & Art Jam Session at the Wilson Building: The arts are taking over the Wilson Building next week. Washington Performing Arts is hosting a free and open jam session featuring artists from across the city (and Wilson Building)--and we want you to come! My office is excited to be a partner in this event and feature musicians, dancers, poets, and visual artists throughout the night. I hope you will join us on Wednesday, March 16 from 5:30-8:30 p.m. here at the John A. Wilson Building.

D.C. Arts and Humanities Commission Needs Panelists: Looking to support the growing arts scene in the District? DCCAH is currently looking for advisory review panelists for the FY17 grant season and encouraging D.C. residents to nominate themselves or their peers. To submit your resume, email Grants Director Steven Mazzola at steven.mazzola@dc.gov or call 202- 724-5613. Please make sure your home address is clearly visible at the top of the resume.

Discounts for the Circus: We’ve again received a number of community vouchers to give to residents, and this time it’s for the Ringling Bros. and Barnum & Bailey Circus coming to the Verizon Center. If you would like vouchers, please email Ashley Fox at afox@dccouncil.us to coordinate pick up.

I hope your week is off to a great start, and as always, thanks so much for reading.