Continuing her efforts to strengthen consumer protection and enhance building code enforcement within the Department of Consumer and Regulatory Affairs (DCRA), D.C. Councilmember Elissa Silverman (I-At Large) introduced legislation earlier this week enabling DCRA to clearly identify and hold responsible all partners in real estate limited liability companies, known as LLCs. Currently, financial partners in an LLC do not have to disclose their ownership stake, which has allowed slumlords and unscrupulous developers and contractors to hide behind the LLC corporate veil.

A bill ending automatic license suspensions for low-income residents who fail to pay debt from parking tickets or traffic tickets passed unanimously on second reading at this past Tuesday’s legislative session, the last before the D.C. Council heads into summer recess. The Driver’s License Revocation Fairness Amendment Act of 2017, originally introduced by Councilmember Elissa Silverman (I-At Large) last December, was one of five bills incorporated into the Traffic and Parking Ticket Penalty Amendment Act of 2018 to reform the way the District processes and settles unresolved ticket debt.

“Suspending the licenses of low-income residents for inability to pay tickets ends up punishing people for being poor,” said Silverman. “Nearly half of all license suspensions lead to job loss, which makes it even harder to pay debt that made you lose your driving privileges in the first place.”

And this week is that annual rite of this time of year: No, I’m not talking about walking out your front door into what feels like a sauna! I’m talking about the Capitol Hill and Palisades Fourth of July parades! They are some of my favorite District traditions. I’ll be participating in both, and shoot me an email if you’d like to walk with me!

Even with the hot temps, the D.C. Council isn’t quite in summer mode just yet! We have two more weeks of official business before heading off on legislative recess starting July 15. The lead up to recess is busy with important hearings on bills I introduced regarding reform at the Department of Consumer and Regulatory Affairs (DCRA), not punishing low-income residents through driver's license suspensions, and helping District residents hurt by the Trump tax law. See a list of upcoming hearings on these bills below. Many of you also wrote to me about the state and local deduction (SALT) cap; my bill will create an option similar to what has been implemented in New York to give you a local income tax credit for donating to a D.C. educational fund that can be applied to the D.C. income tax you owe. The hearing is this Friday.

Baseball is also a staple of summer, and I want to thank everyone who braved the threat of rain to join me at Silverman Night with the Nationals a week or so ago! My evening with the Nationals came at the end of an eventful week. I’ve gotten many emails both in favor and against Initiative 77, which passed by a 55 percent to 44 percent margin. Initiative 77 will gradually phase out D.C.’s subminimum wage for tipped workers in the restaurant, hospitality, and service industries.  As chair of the Labor and Workforce Development Committee, I am setting up small discussions with owners and managers of restaurants in D.C. about Initiative 77, as well as with workers in these industries, to discuss how we can best move forward. If you would like to be part of those, please email me at esilverman@dccouncil.us.

Newsletter: The Stanley Cup Is Here!

Yesterday we experienced what is great about sports: It can unite people and bring us pure, 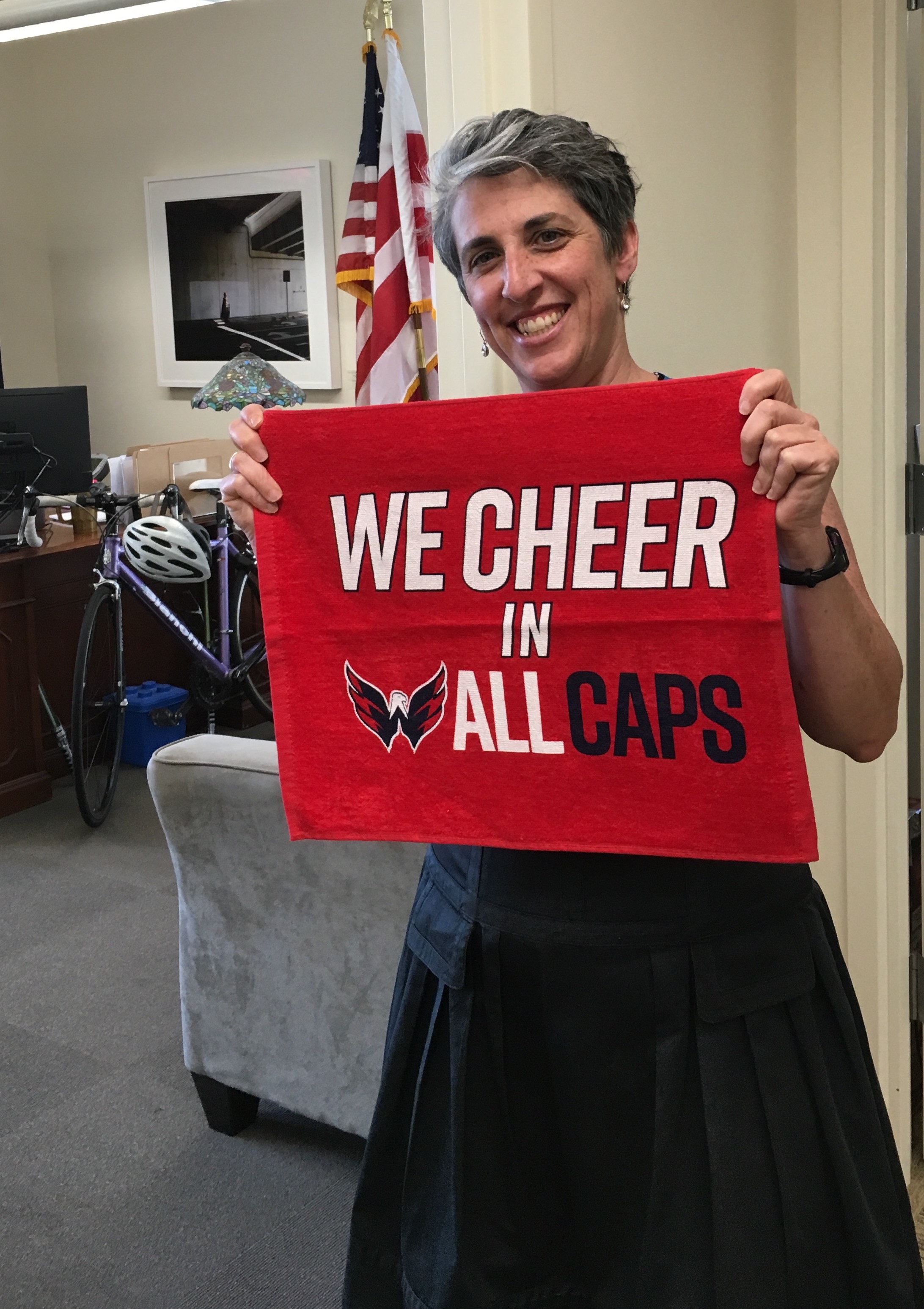 unbridled joy. After recent years of what else sports can bring—the agony of an earlier-than-expected playoff exit—it was so thrilling to celebrate a championship win as a community. Seeing the Stanley Cup sit in the shadow of the U.S. Capitol was something else, and then the sea of red that flooded Constitution Avenue, every cross street, and the Mall was unbelievable. Congratulations again to our Washington Capitals, our fantastic fans both longtime and newly indoctrinated to #RockTheRed, and all the D.C. agencies and public employees that made last-minute watch parties and our championship parade so amazing.

I want to take a moment to also talk about something else exciting this summer: expanded outdoor pool hours! This year pools are opening one hour earlier because of additional money put in the budget last year after hearing from residents. I hope that the additional hours better accommodate working families and families with small children, and I’ll be looking for more ways to open even earlier in the future.

There are more budget updates and community news below, so keep reading!

Newsletter: The Budget Is Almost Done! 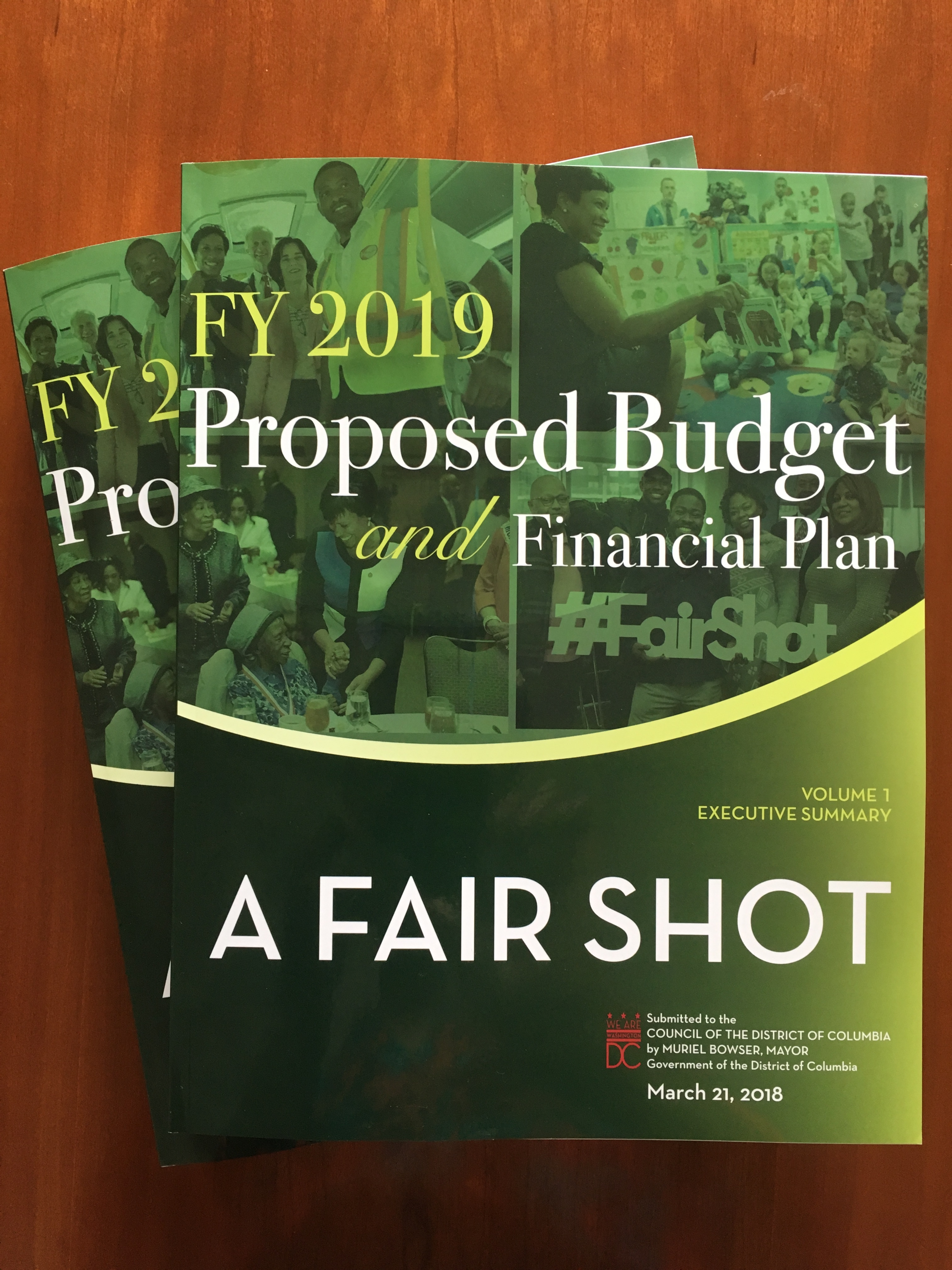 Yesterday I joined with all my colleagues to give preliminary approval to the Fiscal Year 2019 budget, which will fund all the agencies and programs for the District next year. It is an immense task to review and make changes to our $14.5 billion budget, and I want to take a moment to thank my outstanding legislative and committee staff. They work hard on your behalf all year round, but during these last eight weeks they have spent late nights and weekends away from family and friends to do the analysis, negotiating, and cajoling needed to put in place some of the innovative initiatives we are funding.

Full details on the budget are below in the legislative update.

As many of you also know, budget season coincided with other challenging moments at the Wilson Building. I want to make sure you are aware of the statements I put out regarding the troubling remarks made by my colleague, Trayon White. They can be found here and here. Hate speech of any kind has no place in our city, and I sent a letter to Mayor Bowser and my colleagues the morning after a detestable rally was held on the steps of the Wilson Building. I am pleased that the rally’s organizer has resigned from his position on the board of the D.C. Housing Authority.

Earlier today, D.C. Councilmember Elissa Silverman (I-At Large) voted with her colleagues to unanimously pass the Fiscal Year (FY) 2019 budget. This was the first of two votes on next year's budget allocation and the legislation supporting it. Silverman, who chairs the Council's Committee on Labor and Workforce Development, championed programs that have a proven track record of putting D.C. residents to work and funded housing programs that ensure residents can afford to live in the city.

“Putting our tax dollars and efforts toward making sure every District resident can get a living wage career and affordable housing was my North Star, my guiding principle, of this budget,” Silverman said. “We have an immense task before us as a city to make D.C. more equitable and affordable. What we do in next year's budget bends our city a little more toward opportunity and justice.”

The budget also includes landmark investments in maintenance for Metrorail and Metrobus, as well as increased funding for education, housing, healthcare, and public safety.

Highlights of Councilmember Silverman's efforts in the FY 2019 budget are the following:

Councilmember Elissa Silverman (I-At Large), who chairs the Committee on Labor and Workforce Development, today held a Committee vote on budget recommendations for the District’s 2019 Fiscal Year budget for agencies under the Committee’s jurisdiction. The recommendations include investments to expand job training in the hospitality industry, provide literacy training for adults, and improve transparency and oversight of the District’s workforce spending.

“My goal is to put the District’s workforce dollars into programs and workforce opportunities that will make the most difference for our city and its residents,” Silverman said. “I want our investments to prepare people for good, living wage jobs—and ensure that District workers actually get the wages and benefits they earn.”

Yesterday, at a rally organized by D.C. Housing Authority Board member Joshua Lopez held outside of the John A. Wilson Building, an attendee called At-Large Councilmember Elissa Silverman (I-At Large) a “fake Jew” and referred to Jewish people as “termites.” Councilmember Silverman sent the following letter to her colleagues earlier today:

The hateful words spoken yesterday outside the Wilson Building have absolutely no place in our city. It is unconscionable that event supporters brush off these repugnant words of prejudice simply as “wrong things” to say and speakers going “rogue.” Not at all: This was a deliberately misleading, intentionally designed attempt to stir up division and hatred, particularly for me as a Jewish, At-Large Council member, who represents the entire city including Ward 8.

It is part of a disturbing tolerance within our city for anti-Jewish hate speech, which has made these last several weeks increasingly hurtful and difficult for me and others at the Wilson Building who are Jewish, as well as for the entire D.C. Jewish community.