Happy New Year! I want to wish you and your family a very joyous, healthy, and productive 2017. Thank you for your support these past two years.

I think we all agree 2016 will be a year to remember! For many of us, national politics has been heart-wrenching, but I hope you feel that local politics has provided a hopeful path forward.

Join Councilmember Silverman This Sunday for a Holiday Celebration! 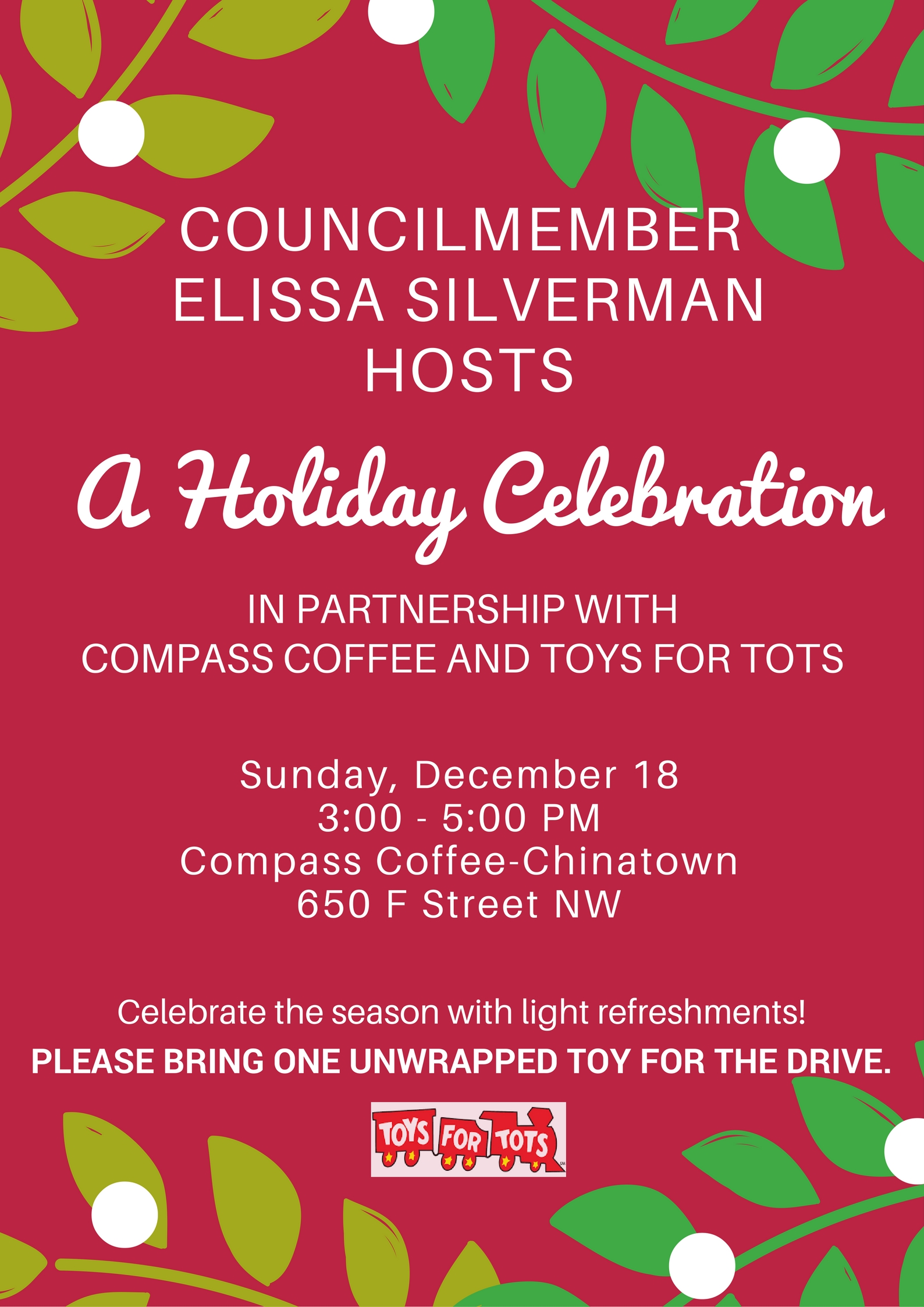 We’re in the home stretch at the Wilson Building, with the end of Council Period 21 approaching on December 20. We’re working hard on Paid Family Leave and other issues, but it’s always important to take a break. So please join us at our holiday party at Compass Coffee in Chinatown (650 F Street NW) on Sunday, December 18, from 3:00–5:00 p.m. to enjoy some holiday cheer and support Toys for Tots!

We’ll provide the jelly donuts and holiday cookies (and maybe a game of spin the dreidel). This is our second year teaming up to support Toys for Tots with Compass Coffee’s Harrison Suarez and Michael Haft, who are both Marine veterans. All four Compass Coffee locations have boxes for Toys for Tots, and their fellow Marines will join us Sunday to collect the toys. All we need from you is to bring the cheer. We encourage you to bring one unwrapped child’s gift for our donation box if you can.

Happy Thanksgiving! This has been a rough November for many

of us, so my staff and I wish you a very happy and cheerful holiday with friends and family.

Admittedly, I am still stunned about the election outcome November 8. I am very concerned about the impact of a Trump presidency on our country and on the District of Columbia; I will write more about that in the next newsletter. Given the cataclysmic results nationally, it was easy to overlook the local results. However, there was good news in D.C. elections; I was excited to see overwhelming voter support for D.C. Statehood. I also want to congratulate Robert White (D-At-Large), David Grosso (I-At-Large), Jack Evans (D-Ward 2), Brandon Todd (D-Ward 4), Vince Gray (D-Ward 7), and Trayon White (D-Ward 8) on winning four-year terms. Our fight for statehood doesn’t end with this month’s election results. I look forward to working with my new and returning colleagues to continue fighting for equal representation and ensuring that everyone—and I truly mean everyone—knows that they are welcome and protected in our city.

Thanksgiving also brings us closer to the end of Council Period 21, which concludes on December 20. There are two more Council legislative meetings left to push some of my policy priorities over the finish line—including paid family leave—so keep reading for a preview of what’s coming up in my office and how you can help!

In stressful times—and this week certainly qualifies as one for many of us—it’s important to get back to basics: good nutrition, sleep, and EXERCISE. So I hope you'll join me and a few Council colleagues, the Washington Area Bicyclist Association, and Capital Bikeshare for a fall bike ride on the new Kenilworth section of the Anacostia River Trail TOMORROW, NOVEMBER 11, at 11:00 a.m. We’ll meet up at the Bikeshare station at 19th Street SE and East Capitol Street SE (near the Stadium-Armory Metro stop)! Bikeshare has agreed to waive user fees for anyone who wants to use a Bikeshare bike for the ride.

Councilmember Silverman's Statement on Death with Dignity Act of 2015

I have heard from many District residents and from people all over the country—and even received one email from Italy. People are very passionate about this issue and want to make sure we make the right decision.

Today, the D.C. Council took the first of two votes to strengthen the District’s approach to vacant and blighted properties, unanimously approving the Vacant Property Enforcement Amendment Act of 2016 at its regularly scheduled legislative meeting.

The legislation, which was introduced by Councilmember Elissa Silverman (At-Large, Independent) and co-introduced by nine colleagues, reforms the way the District government deals with vacant properties across the city. Specifically, it would reduce the maximum amount of time a vacant property can qualify for an exemption from higher vacancy tax rates and closes a loophole that allows continuous renewal of construction permits to qualify for tax exemptions. It would also require owners of vacant properties to prove they are no longer subject to the higher tax rates, rather than placing the responsibility on inspectors from the Department of Consumer and Regulatory Affairs (DCRA) to re-inspect them every six months. The most recent report from DCRA indicates that there are nearly 1,300 properties designated as vacant or blighted in the District.

Today, D.C. Councilmember Elissa Silverman (At-Large) introduced a bill requiring property sellers in D.C. to disclose knowledge of any Stop Work Order issued on a property under consideration for purchase. The “Stop Work Order Disclosure and Regulation Amendment Act of 2016” will increase consumer protections by providing homebuyers with necessary information to make an educated purchase decision. The bill, which was co-introduced by Councilmembers Anita Bonds (At-Large), Mary Cheh (Ward 3), and Jack Evans (Ward 2), came as a result of resident testimony at oversight hearings on the District’s Department of Consumer and Regulatory Affairs (DCRA).

Calling All Poets! Councilmember Silverman Hosts "Word on the Ward" (10/19)

Calling all poets! At- Large Councilmember Elissa Silverman is hosting her first spoken word event, Word on the Ward, on Wednesday, October 19, from 5:00-8:00 p.m. at Wicked Bloom Social Club (1540 North Capitol St NW). The event is centered on the importance of civic engagement among youth and young adults to make sure their concerns and ideas are being heard.

Word on the Ward is intended to provide a safe space for artistic expression of current events and for participants to leave with a better understanding of what elected officials do, who they are, and how to access them. Each poet will have 3-5 minutes to speak and is asked to prepare a performance piece using one or more of the following prompts: