Final Remarks at the Last Legislative Meeting of Council Period 24

I delivered these remarks last night at the last Legislative Meeting of this Council Period, which is the last of my tenure on the Council. They were meant for you, my fellow residents and neighbors.

Who would have thought, way back when, Chairman Mendelson, that you would be handing me a crystal bowl after serving as your at-large colleague for eight years on the D.C. Council?

Life is surprising, and certainly my political career in D.C. local politics was unexpected, and, in many ways, inexplicable.

For example, who would have predicted the October surprise of 2014 – Mayor-for-Life Marion Barry’s endorsement of me, a candidate whose initial campaign chair was Kathy Patterson? 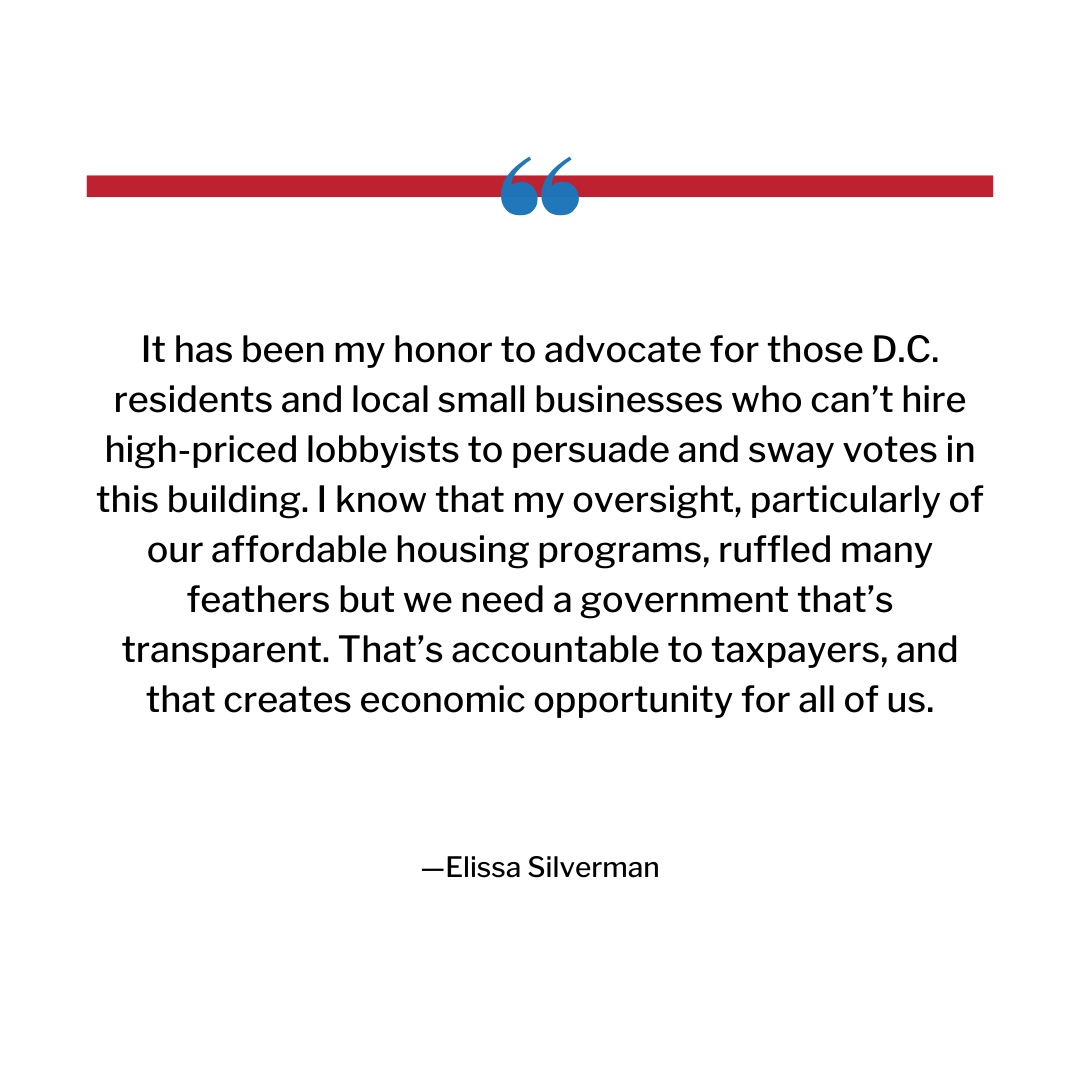 It has been my honor to advocate for those D.C. residents and local small businesses who can’t hire high-priced lobbyists to persuade and sway votes in this building. I know that my oversight, particularly of our affordable housing programs, ruffled many feathers but we need a government that’s transparent. That’s accountable to taxpayers, and that creates economic opportunity for all of us. That’s why I have focused on building career pipelines into our biggest industries, such as health care, hospitality, IT, and infrastructure. I ask colleagues to continue funding these efforts, to make nursing degrees free at UDC and expand year-round employment for our young people.

Thank you to my colleagues who served on the Labor Committee, which many have praised for its collaboration. I’m very proud of that. I’m also proud that at my last legislative meeting, this Council passed a bill that will give nearly 10,000 domestic workers in this city a right to an employment contract and dignity in their workplaces. It’s also fitting that DCHA’s dysfunction was debated, since creating a locally funded public housing repair fund was one of the first big budget items my office championed. And I am proud to have worked with many colleagues present and past, and a wide coalition of residents and small businesses, to implement paid family leave, which has been a win-win-win for our city.

I took a lot of punches, and that took a toll. I fully admit working in my Council office was not easy or without conflict and controversy. I’m told some people signed up because of the conflict and controversy. I am in awe of the people I got to work with in the Silverman Council office, for their smarts, their compassion, their diligence, and their passion for making this city better. Thank you to the staff of my Labor Committee past and present: Eric Irving, Marcia Huff, Margaret O’Hora, and Liz Weiss, who served as Committee Director all six years.

Thank you to David Connerty-Marin, Kelly Hunt, Maya Brennan – especially for your fabulous work on DCHA – and Will Singer, who I can’t believe came back to DC to work with me. I especially want to thank three people who spent all eight years with me: Charnisa Royster, Pat Joseph, and the incredible, magnificent Sam Rosen-Amy.

I’m grateful for the opportunity to serve the residents and businesses of this city. It is eight years I’ll never forget.