It’s Saturday, and I usually don’t bug you on the weekend, but there are three urgent items that I feel are so important that I wanted to communicate with you today: the protests condemning police brutality around the country, and, specifically in our city; the militarization of DC streets by Trump and DC government’s efforts to resist; and, finally, the absentee ballot debacle and investigation into what happened on Election Day...

First, the murder of George Floyd by police officers sworn to protect has been gut-wrenching for all of us, and particularly for Black and Latino residents of our city who worry daily that this scenario could happen to them simply because of the color of their skin. It has sparked a true movement for police reform all over the country and amplified voices that have been saying for some time that we need to be more focused on police accountability and funding evidence-based solutions that will truly make all of us safer.

I know that some of you will be participating in the protests today. I will be too, along with some of my Council colleagues. Last Tuesday night, members of my staff and I joined the Office of Police Complaints to observe Metropolitan Police Department (MPD) tactics for the protests. I thought it was important to my Council responsibilities to do oversight of the MPD to understand better how the department operates in these situations and how protesters can register complaints. But I am participating in the protests today because I truly support efforts to end tactics like stop and frisk that have been racially biased and so damaging to people of color in our city and country.

Of course, we are still in a pandemic and there are very valid concerns regarding transmission of coronavirus due to mass gatherings. I encourage all who plan on participating to wear a mask or face covering, follow social distancing as much as possible, and take advantage of free COVID-19 testing in our city in the following days. Below there are links to testing sites and other resources.

You also have the opportunity to weigh in on these issues with the Committee on Judiciary and Public Safety. I am very disturbed by reports in the press and from residents about the tactics used by MPD at 15th and Swann Street NW. The Committee, which oversees MPD, rescheduled its budget hearing for a date still to be announced and is accepting testimony (live, written, and voice) until June 16. I will be attending and asking questions specifically about Swann Street. More details on how to submit testimony and sign up to testify live are below.

In our city, the movement to end police brutality has been commingled with the fight for DC statehood and militarization of DC streets by the Trump administration. When I went out Tuesday night with the Office of Police Complaints, the head of that office, Chairman Phil Mendelson, Councilmember Charles Allen and I were prevented by federal police officers from walking on Vermont Avenue NW. That is a DC street, and DC government and DC residents should be able to say who can walk or protest on that street. Federal authorities such as the Secret Service do have the ability to temporarily shut down streets to protect the President of the United States, but it is not a blanket authority. After pushback from the DC government Thursday, the feds retreated back to patrolling federal grounds.

I support the Bowser administration and Attorney General Karl Racine in resisting these efforts to militarize our city streets. It is frightening to hear and see combat vehicles on our streets. I also spoke with Attorney General Racine yesterday on the legal strategy to resist the Trump administration. The attorney general sent a letter to US Attorney General Bill Barr about the legal authority cited for calling up other state National Guard troops, and he assured me that if there are aggressive moves made today or in coming days, the Office of the Attorney General is prepared to take emergency actions in court.

Finally, I know we all need to get on with our Saturday, but I do want to spend a moment talking about voting and Election Day: I believe the DC Board of Elections failed DC voters for the June 2 primary. As a government, we encouraged you to vote safely by absentee ballot, but many of you requested ballots and never received them in the mail. You waited, you inquired again, you waited again and when those ballots never came you ended up in very long lines on Election Day. Some voters waited up to five hours to vote.

I have sent several letters to the DC Board of Elections about this debacle. We need an investigation into what happened. We also need the Board to act urgently to make sure the same debacle does not occur with the June 16 special election in Ward 2. I believe the Board so failed its responsibilities that its chairman, Michael Bennett, should resign.

The Council’s Committee on the Judiciary and Public Safety also has oversight over the Board of Elections. My office alone received emails from more than 500 voters who never received their absentee ballots. I hope many of you will submit testimony. I will be forwarding all those emails for the record, and I will be attending that hearing to get to the bottom of what happened. It cannot happen June 16, November 3, or ever again.

That’s enough from me. Check out the resources below. Stay safe and stay well, DC. Let’s make Black Lives Matter not just a slogan but a moral foundation of our city that is rooted in public policy and budget resources. 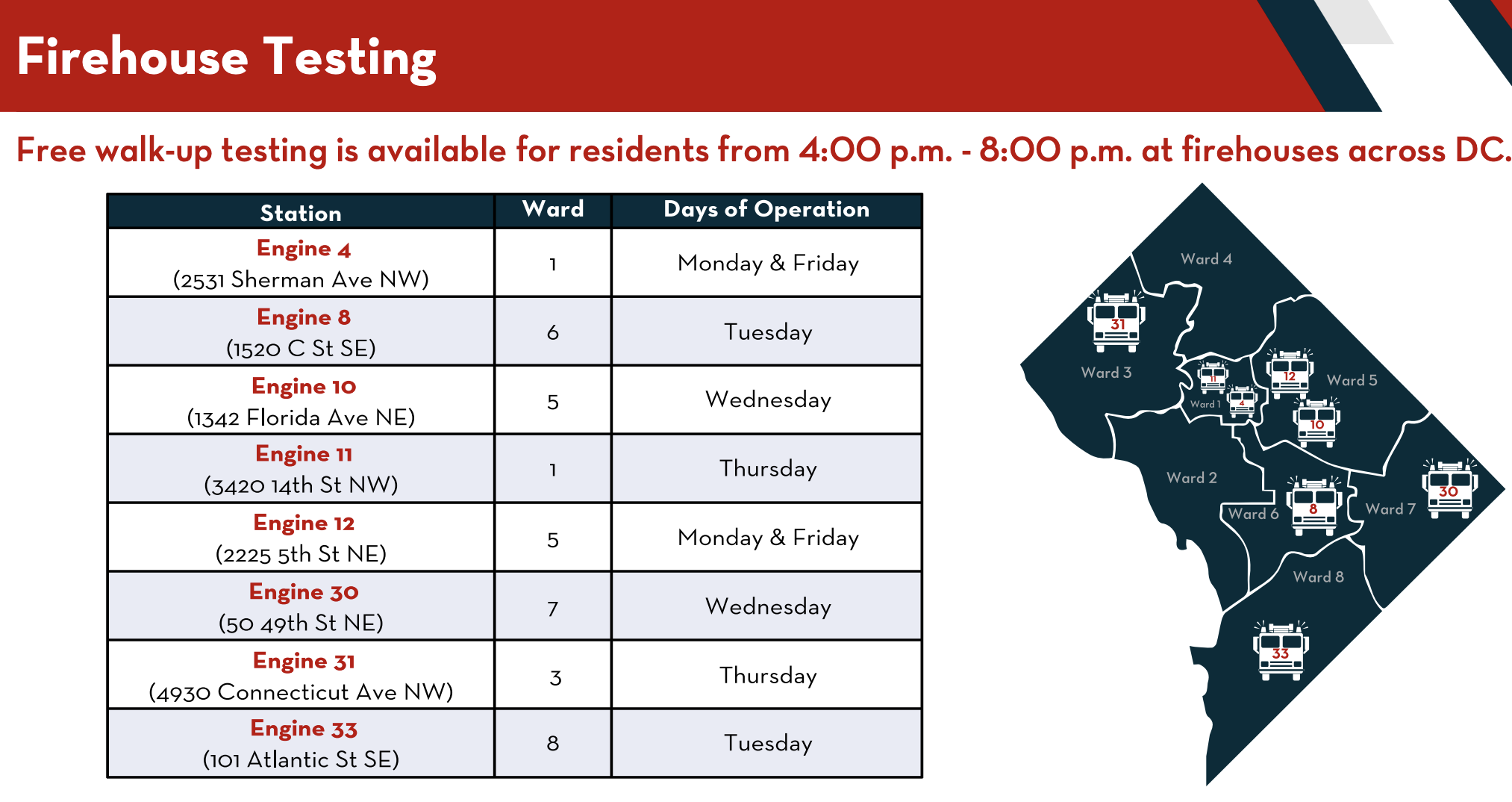 Testing continues throughout the District and is available at five public sites: 2241 Martin Luther King Jr Ave SE in Ward 8, University of the District of Columbia’s Bertie Backus Campus in Ward 5, Howard University Hospital in Ward 1, Bread for the City in Ward 6, and Judiciary Square on F Street NW in Ward 2.

All public sites require an appointment, except the new walk-up site at Judiciary Square.

Testing is also now available at several firehouses across the District! These firehouses are offering free, no appointment needed tests for all residents: Engine 4, 8, 10, 11, 12, 30, 31, 33. See the above graphic for dates and locations.

For additional information on testing and locations, click here.

The Council oversight hearing for the Metropolitan Police Department has been rescheduled for June 15, 2020 (12pm-6pm). The last day to submit a request to testify live is June 11. The Committee is accepting written and voicemail testimony until close of business on June 16.

Here’s how you can submit testimony:

The Committee will also be holding two government witness hearings on June 16 that may be of interest to the public:

These hearings can be watched on DC Council Channel 13 or online at www.dccouncil.us.

DC Board of Elections

On Friday, June 19, 2020, the Committee on Judiciary and Public Safety will convene a public oversight roundtable to discuss DCBOE’s performance in conducting the June 2, 2020 Primary Election. The roundtable will be held on Zoom from 10am to 4pm.

There IS a public witness opportunity for this hearing. Given how many District voters were disenfranchised by the DCBOE’s disorganization and lack of follow up, it is extremely important that residents share their experience for the public record.

Please click here for detailed information and instructions for requesting an absentee ballot, which can be done online, via the Vote4DC app, email, fax, mail, or by phone.

Given the problems so many voters have been experiencing with absentee ballots, I encourage everyone who can to vote early and vote in person. Ward 2 has two available voting sites:

With the constant stream of news and updates during the coronavirus pandemic, I know it can be hard to keep track of which resources are available for which issues. Here’s a quick roundup of some of the most recent coronavirus resources and program updates from our office: