The allegations are not only troubling but very damaging to your trust in our government. Councilmember Evans had previously undisclosed clients with his consulting firm whose business interests intersect with D.C. government and the Council. When I spoke with Chairman Mendelson, I recommended that the law firm act thoroughly but expeditiously. The Council goes on a two-month legislative recess starting July 15, and it would be great for a report to come to the Council in early September if possible. That way, we can examine the evidence, get a response from Councilmember Evans, and make decisions about how to proceed soon after we come back.

On Tuesday, Councilmember Evans will respond to questions from me and my colleagues about the WMATA investigation. He has resigned from his position on the WMATA board, but he refutes evidence of ethical violations in the memo. He asked for this opportunity, which I support, before the Council takes any further disciplinary action. Along with the investigation, Chairman Mendelson said that he’ll recommend removing Councilmember Evans as Chair of the Finance and Revenue Committee at our July 9 legislative meeting, the last meeting before the summer recess. I am an active member of that committee, and as it stands now, I will vote in favor of this recommendation.

I have gotten many emails and comments from you about this situation. Thank you for your input, and as always, feel free to be in touch.

I need you to join me on July 4 at the real celebration of freedom and democracy in D.C.: 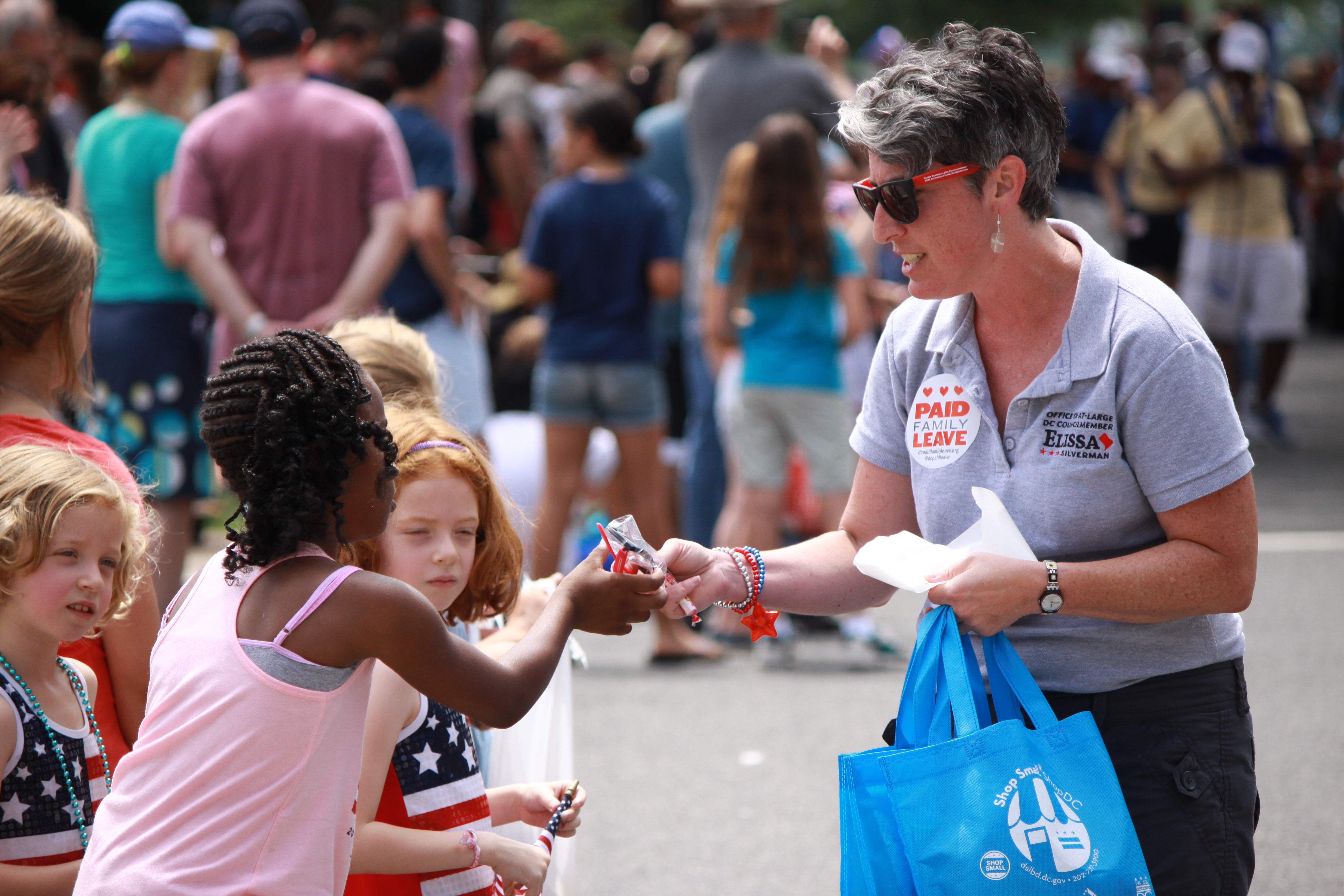 the Capitol Hill and Palisades parades! The candy is ready, the D.C. flags are set to hand out, the truck is loaded up with some great tunes…all we need is you!

Seriously, I can’t hand out 600 cool D.C. flags and 50 pounds of candy by myself! Please join me in two of the best community celebrations in our city. It’s a blast! Here's where I will be:

If you would like to walk with me, sign up using this link or email Ashley Fox in my office at [email protected]. 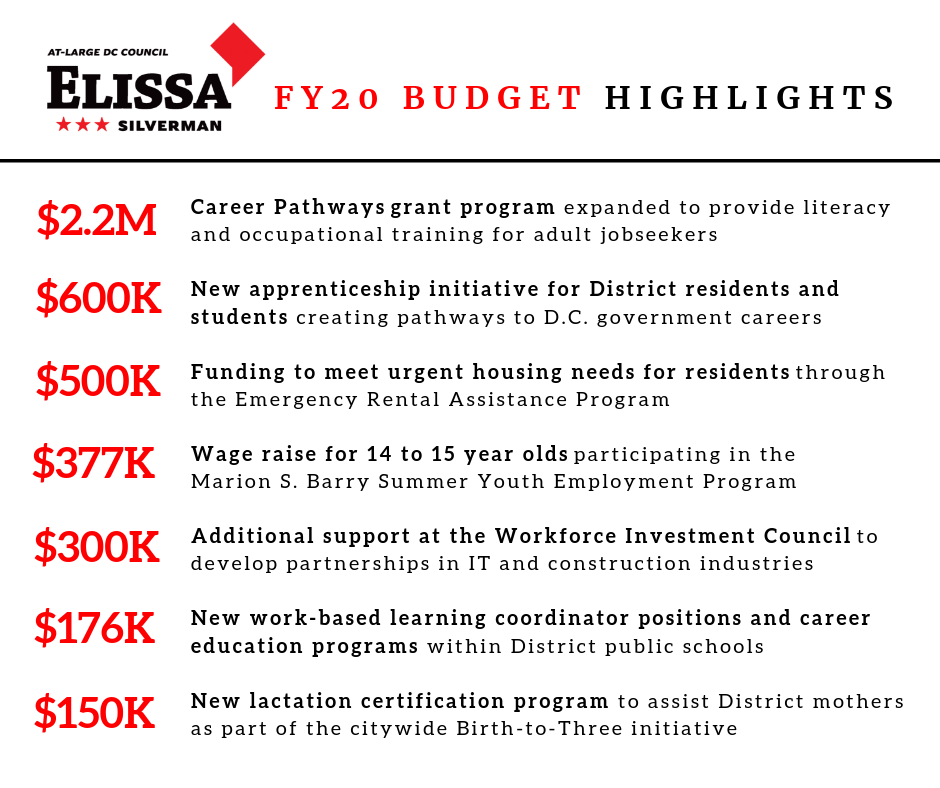 After numerous hearings, meetings, calls, emails, and Twitter discussions, my colleagues and I took the second and final vote on authorizing language for next year’s budget last week. From investments in affordable housing to early childhood education, next year’s $15.5 billion budget puts a dent in some of our city’s most challenging issues, but this is only one part of the many things we need to do to truly make the District more safe, equitable, and fair to every resident.

I’m especially proud of my Labor and Workforce Development Committee’s investments in new apprenticeship opportunities and stronger workforce development programs for District residents. This year, my focus was largely on ways I could address urgent workforce funding and oversight needs within my committee—issues that intersect with and directly impact public safety, healthcare, and education priorities across the city.

You can read my Committee’s full FY20 budget highlights here.

The FY20 Budget and Line Hotel: For those that have been following updates about the Line Hotel in Adams Morgan, you might have read that the Council delayed its $46 million tax break by one year. This year’s budget redirects a little more than $1 million from the abatement to the D.C. Housing Authority for public housing repairs in Ward 1. The rest of the abatement will remain in place, contingent on the Line Hotel meeting all the requirements in its tax abatement law.

Despite an April 19 letter from the Department of Employment Services (DOES) informing the hotel’s owner that they did not meet two of the seven hiring requirements to receive the subsidy, DOES has now said their determination in that letter was not final. Their audit to evaluate how many District residents were hired by the Line Hotel remains open, so yesterday’s budget keeps the Line Hotel’s abatement—roughly $1 million a year—in place until a final determination of eligibility is reached.

Because I remain concerned about the abatement’s audit remaining open after an unfavorable decision was seemingly announced, I moved an amendment last Tuesday that ensures any documents related to audit numbers will be made public. That amendment was accepted unanimously, and I’ll be continuing to work with DOES, the Line Hotel, my Council colleagues, and the administration to ensure that District residents are benefiting from taxpayer investments and requirements under District law are being met.

Now that the budget is done, keep reading for legislative updates!

Spending Affordable Housing Dollars Well: Last week, the Housing Committee held a hearing on my Housing Production Trust Fund Transparency Amendment Act, a bill I introduced because I was frustrated by having every request for basic information on affordable housing project applications to the Housing Production Trust Fund denied. The District spends more local dollars per capita on affordable housing than any other jurisdiction in the country, and the trust fund is the city’s primary source of funding to produce affordable housing. But a few weeks ago, I learned from a D.C. Auditor’s report,that the Department of Housing and Community Development (DHCD) isn’t following its own rules when deciding which trust fund applications to award.

Unfortunately, due to laryngitis, the DHCD Director was unavailable to testify about my concerns and others that were raised by the D.C. Auditor, including last year’s selection of the lowest-ranked project out of 20 proposals that received affordable housing dollars. The hearing was recessed on Monday but will resume on July 10 at 10:00am. At that point, I will ask the Director to explain her actions and hope to work with her to create a more transparent and fair process.

You can read the Auditor’s full report here and read a press release here about my bill that would make information about how applicants to the fund are assessed and selected for funding available to the public. 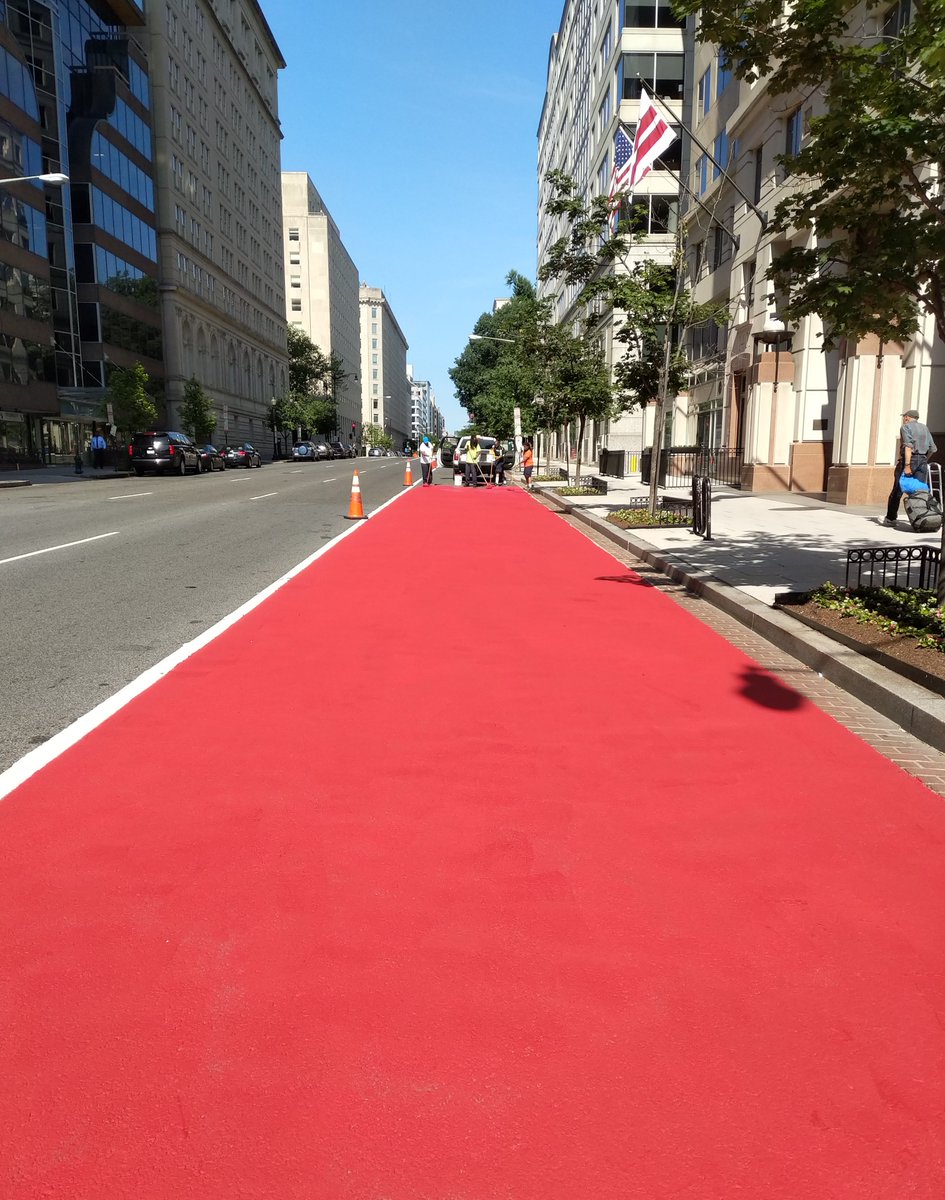 Washington, the D.C. Department of Transportation, and some of my Council colleagues on a rainy morning test ride of the city’s new red “bus only” lanes through two of the District’s busiest transit streets, H Street NW and I Street NW. I also attended a community meeting focused on transportation needs and strategies for making bike and pedestrian safety infrastructure more equitable in areas east of the Anacostia River. There are certain parts of the District that are only bus or car accessible, which only reinforces that finding ways to ease and expedite bus commutes in particular continues to be a critical part of strengthening our city’s transportation network.

Many of have written to me about the next steps for four transportation safety bills that I co-introduced last month, and I join in encouraging my colleagues on the Transportation and Environment Committee to hold a hearing to move those bills forward as soon as possible. You can watch a recap of our bus ride here and check out this Greater Greater Washington article about the transportation equity meeting the other week.

Hear My Podcast Episode on D.C. Radio: The night before the Mayor’s proposed FY20 budget 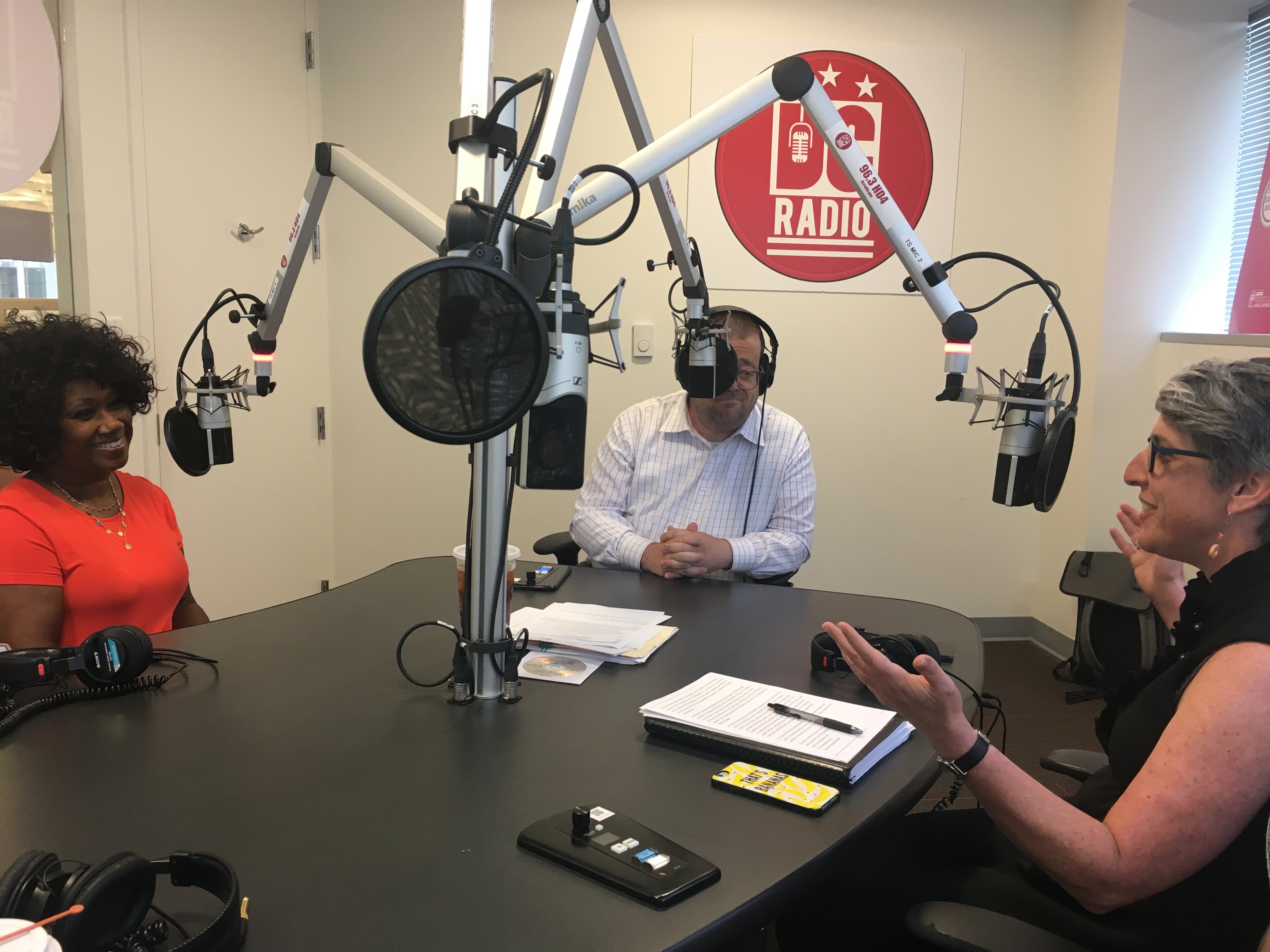 was released, I joined a friend at JV’s Restaurant in Fall Church (yes, I venture out of the District occasionally!) to see a singer he said was fantastic. When she did an audience roll call, she called out my name! The headlining act was Shirleta Settles, a Ward 4 resident and D.C. Department of Parks and Recreation employee.

I decided to bring Shirleta as a special guest to my most recent recording of the Council’s podcast, “Hearing the Council,” since the episode is all about music. Take a listen to meet Shirleta, hear my thoughts on Tuscadero’s timeless song about Mount Pleasant, and revisit my favorite go-go classic!

Provide Feedback on the Rayful Edmond Resentencing: The Office of the Attorney General (OAG) and AG Karl Racine are gathering community feedback about whether a federal judge should reduce Rayful Edmond’s sentence. Edmond ran a major cocaine ring in D.C. in the 1980s and was convicted of federal drug distribution charges. He is serving a life sentence without parole. This is a significant and unique opportunity for District residents to be heard in the adult criminal justice system, where we often do not have a voice. OAG is making sure the D.C. community has a voice in this process. Learn how you can provide feedback at RayfulEdmondFeedback.com.

Justice for Janitors: There are 7,000 cleaners who work in the District, and I was glad to join 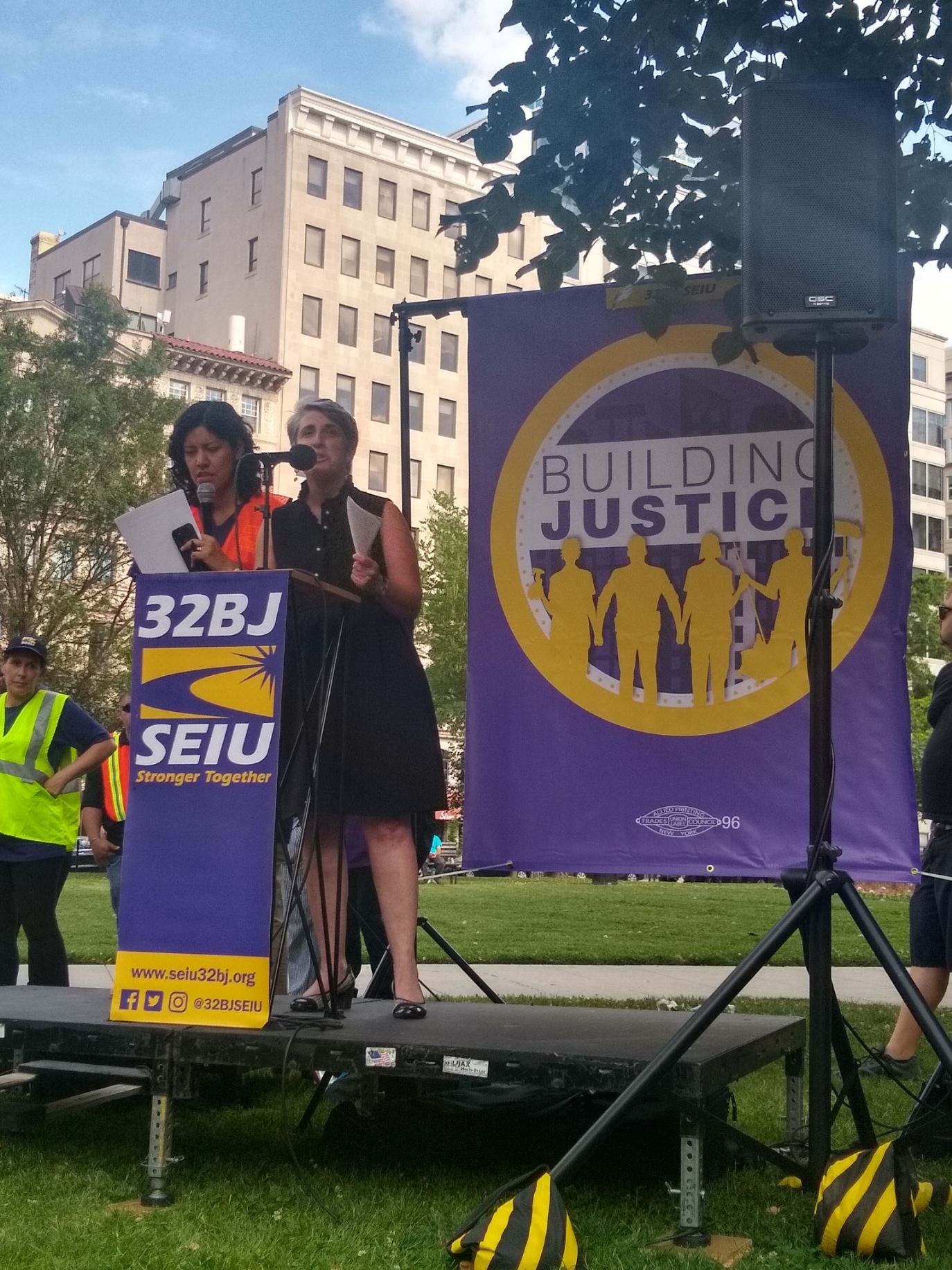 their representative union, SEIU 32BJ, to support asking for a new, fair contract that includes a pay raise. Janitorial workers are key behind-the-scenes players in D.C.’s economy, and I hope the rally will be the start of good faith negotiations that ensure they earn a living wage. District workers should be receiving some of the benefits of our booming local economy, and right now janitors continue to perform a challenging job for little pay.