Topic No. 1: Reforming Our Housing Authority

Urgent reform of the D.C. Housing Authority started last week, with the passage of emergency legislation I introduced in collaboration with Attorney General Karl Racine. The bill directs some immediate actions in response to the scathing federal report on the condition of D.C.’s public housing and general dysfunction at the city’s biggest affordable housing provider.

Among other things, the legislation requires board members and the executive director to get trained up fast in the basics of public housing so they can do their jobs.

It’s pretty basic, but we need to start with the fundamentals. I’ll admit it is frustrating, because one of the first actions I took as a councilmember eight years ago was to create a public housing repair fund, after seeing some of the deplorable conditions in DC Housing Authority communities. Since that time, I have been saying loudly and frequently we need to pay a lot more attention to what is going on there.

When the federal report came out, I was already working on a DCHA reform bill, which I will submit in the next two weeks. This large bill will address mayoral control of the board, which has been more focused on doing lucrative deals for developers than on creating and providing safe housing for low-income and very-low income residents. I’ve put together an infographic to explain in a quick way more of what we hope to accomplish. Read more about what will be in the reform bill. 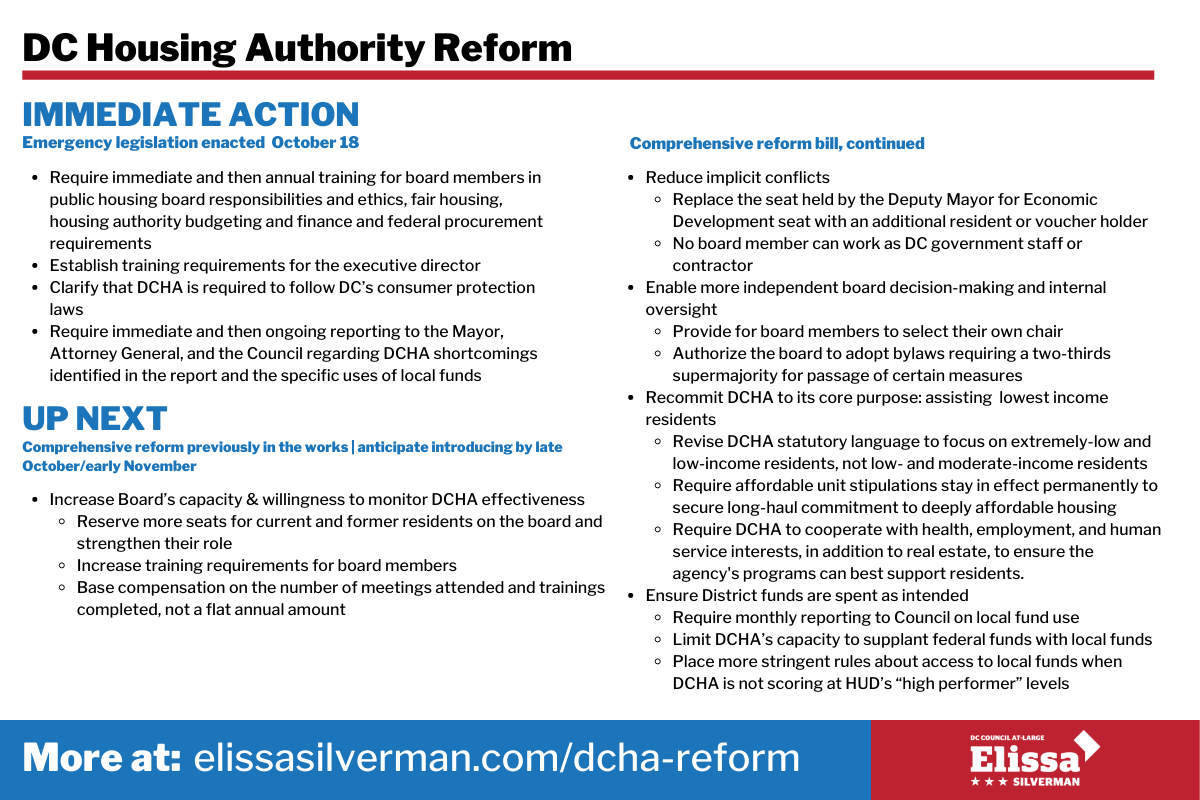 My thanks to Attorney General Karl Racine and his lawyers, who helped with drafting the emergency bill, and to my colleagues on the Council, who unanimously supported it.

Though the federal audit is embarrassing to the city, it is also galvanizing. So many of you have expressed concern, and that is heartening. We need to take full advantage of this moment to take permanent corrective actions. And finally let me say this to our residents who live in housing authority properties:  We see and hear you, and we will work with you to make all D.C. Housing Authority units safe, healthy and dignified. Read my remarks on presenting the emergency bill to the full Council.

Topic No. 2: Employment Rights for Our Essential Domestic Workers

Last week was busy! I’m excited to report that we took the next-to-final steps in the legislative process on my groundbreaking bill that would give our domestic workers, such as housekeepers, nannies, and home health aides, the basic workplace protections that most other employees in the District already have. Last Friday, the Government Operations Committee and then the Labor Committee, which I chair, met to vote on a final version of the bill. The bill will now go to the Business and Economic Development Committee for “markup” and then to the whole Council.

The Domestic Worker Employment Rights Amendment Act of 2022, would require anyone hiring a domestic worker in D.C. to provide the worker with a written contract that establishes their hours, pay, duties, and other specifics about the work being performed. And it would give domestic workers protections under the D.C. Human Rights Act, which they have been exempted from for decades.

People who work in our homes should be treated with the same dignity, respect, and basic fairness as if they did that same work outside the home, and I’m thrilled that we are finally about to right this wrong.

Thanks to my fellow Council members on the Labor and Government Operations committees, and especially to the many workers who showed up repeatedly and advocated for it. This is a true grassroots movement led by domestic workers and their allies.

Topic No. 3: Getting Rid of the Crony-Ridden Sports Betting Monopoly

If we’re going to make sports betting legal in DC, my position is: let’s at least make money from it to pay for important programs in education, housing, and public safety.

D.C. Lottery’s Gambet app doesn’t even do that. You might remember, on the biggest sports betting day of the year – the Super Bowl– it crashed. No surprise, then, that instead of contributing a projected $25 million per year for the District’s budget, it actually  lost $4 million in its first full year of operations.

The $215 million contract was mired in controversy, right down to the day the Council voted on it. I consistently opposed the legislation allowing the sole-sourcing of the contract and its final approval.

Monday, I introduced legislation that would reboot the District’s troubled online sports wagering program by creating a competitive market for mobile apps, eliminating the controversial sole-source deal that resulted in the dismal Gambet app, and bringing in tax revenue.

Residents deserve an online app that works, taxpayers deserve a program that brings in money for the District, and we all deserve a system where we don’t hand huge contracts to a preferred company and its subcontractors without even looking at the competition. We need to turn the page on this embarrassing episode. Read more about the Sports Wagering and Fair Competition Amendment Act of 2022.

I want to wish a Happy Halloween to everyone. I’ll be at various community gatherings over the weekend.