What an amazing first year in office! I wouldn’t be in this position--able to do this great, important work--without your support. So thank you! Thank you for your passion and commitment to making the District of Columbia a progressive, innovative, inclusive city of opportunity for all.

My staff and I worked hard this year to focus on the issues that matter most: schools, public safety, affordable housing, workforce and economic development, WMATA and public transportation, homelessness, clean energy, clean government, and clean elections! OK, that’s a pretty long list. There’s a lot that matters. I put great energy into oversight, making sure I understood how and why we were investing money and other government resources. I worked with my twelve council colleagues to lead the introduction of six bills and be a co-introducer of 48 more bills that I truly believe will make our city more accountable and accessible.

And we’re just getting started…

WHAT’S UP WITH OUR LEGISLATIVE AGENDA?

BEEFING UP D.C. ENFORCEMENT OF VACANT AND BLIGHTED PROPERTIES: I have heard your frustrations about vacant and blighted properties in your neighborhoods. They are nuisances, attracting trash and crime. They are unsafe, hazardous to people and communities. Plus, you have to keep calling D.C. government to make sure the property remains on the vacant and blighted list, and that the lawn is mowed. As I told Matthew Schwartz from WAMU in a news segment that aired earlier this week, that’s just crazy.

And that’s why last Tuesday I introduced the Vacant and Blighted Building Enforcement Amendment Act of 2015. Right now, inspectors from the Department of Consumer and Regulatory Affairs (DCRA) are required to physically inspect every vacant property in the District every six months, just to keep the properties on the official list of vacant properties. This bill shifts the onus from D.C. government to owners of properties to provide proof when they believe that designation should be removed. By placing the responsibility on owners to provide evidence that their property has become occupied or is qualified for an exemption, this legislation makes sure DCRA inspectors spend more time responding to new complaints instead of constantly re-inspecting the same properties every six months.

This bill came about because of the great ideas you sent me--particularly in this case, a great idea from Ward 4 ANC Commissioner David Sheon. Commissioner Sheon, along with the Kennedy Street Development Association, have been vocal activists on this issue. We followed up on David’s idea with DCRA Director Melinda Bolling, who is very supportive of this approach. Thanks also to my bill co-introducers, including Chairman Mendelson and Councilmembers Cheh, May, Nadeau, Orange, and Todd. You can follow the bill’s progress here and learn more about the details on my website.

WHY SPEND D.C. TAX DOLLARS FOR AN NBA PRACTICE FACILITY? It’s a good question, and one of many that I asked at a roundtable last week on the proposed sports facility. Earlier this year, the Bowser administration announced a deal with Ted Leonsis and his company, Monumental Sports & Entertainment, to spend $50 million of D.C. tax dollars to build a facility that will primarily serve as a practice gym for the Wizards and the home court for the Mystics. In addition, the city will pay any cost overruns on the project. So how much will Leonsis kick in to build it? Zero. That’s right. The way the deal is currently structured, Monumental will pay $5 million toward construction, but that is just a payment in advance of the annual rent for the life of the 19-year lease.

Proponents of the practice facility say that it’s not just about pleasing the NBA, it’s also going to spur economic development in Ward 8. The proposed site is on the St. Elizabeths campus, next to the Congress Heights blue line metrorail station. As I said in the hearing, and as reported by the Washington Post, it is unforgiveable that it’s taken this long to focus on economic development along Alabama Avenue SE and other main corridors in Ward 8. But is this the best way to incentivize private development? And what happens if it doesn’t lead to more private investment? Will Monumental and Leonsis pay us back?

I must admit that the roundtable reinforced my concerns. My colleagues who are supportive of this deal pointed to the Verizon Center and Nationals Park, but this is a much different facility. This is a practice gym for our men’s NBA team and home court for our women’s WNBA team, which played 19 games at the Verizon Center this year. That’s quite different from the 41 regular season home games a piece for the Wizards and Capitals plus post-season at Verizon, and 81 regular season games (and let’s hope next year post-season) for the Nationals at Nats Park. And given that nearly 1,500 parking spots are planned for the Wizards facility, most people will be driving in and out, which means that sports fans and concert goers won’t create the same spillover effect that you see in Chinatown or in Navy Yard.

My understanding is that given how the arena is funded--$27 million will come from revenue and taxes from our sports and convention authority, Events DC, and $23 million from District government--there might be only a few opportunities to express your opinions on the project. The D.C. Council will need to approve a development and funding agreement to authorize the $23 million, so please let my council colleagues know how you feel about it! And soon!

HOW TO BEST INVEST IN OUR YOUTH: As many of you know, I am very interested in how to make our Summer Youth Employment Program (SYEP) a valuable experience for our young residents. I am especially interested how best to serve older youth, aged 22 to 24, which the program expanded to serve this year. This was the subject of another roundtable I participated in last week.

SYEP, as it is known, is an icon of D.C. It was started by the late Mayor Marion Barry to give hope and opportunity to District youth, creating exposure to the world of work, mentoring relationships, and some summer income. But for many of our young adults participating in SYEP, the stakes are much higher. They want permanent work, but they can only get work through SYEP. That’s what we heard from several young people who took time out to testify on the program. And given that, I believe we need to make sure SYEP truly is serving the needs of these residents.

That’s why I worked to secure funding for a program evaluation of this past summer's expansion during the budget process earlier this year. My office also worked with D.C. Auditor Kathy Patterson to evaluate the outcomes of the expansion by requesting an audit, which is expected to be complete next year. My goal here is to make sure we are using SYEP to connect our young people, especially older youth, to educational opportunities, effective job training, and ultimately stable jobs that lead to living wage careers.

A FEW THANKS AND KUDOS…. 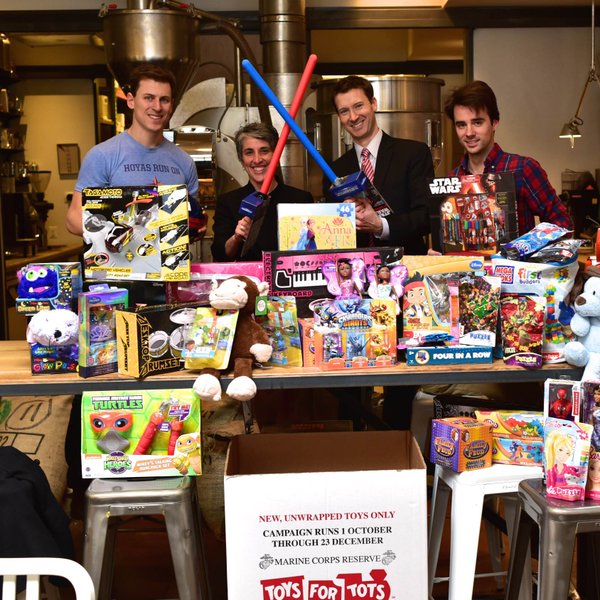 Toys for Tots at Compass Coffee

To our Staff Scheduler Charnisa Royster and Constituent Services Director Pat Joseph for coordinating our Toys for Tots donation! Also thanks to Compass Coffee and Ward 6 Councilmember Charles Allen and staff for combining forces with us to buy toys that will go to our neediest young residents!

To Andy Shallal, who was named the new chair of D.C.’s Workforce Investment Council and who hosted me on his WPFW radio program, Business Matters, Dec. 14. You can listen to it here.

To the General Services Administration, for urging the Public Service Commission to reject the Pepco/Exelon proposed settlement! I found this very encouraging, as the federal government is the biggest ratepayer in our city.

2016 will get off to a quick start, with a legislative session Jan. 5 and many hearings leading up to the fiscal year 2017 budget! Here’s a preview:

Paid Leave Hearings: The remaining hearings on the paid leave bill I introduced with Councilmember Grosso in October have been scheduled!

Remember, we need you to voice your support for bringing paid family and medical leave to the District! If you aren’t able to offer testimony in-person, you can still submit your testimony to the committee for the record. Take a look at my website for a list of other ways to support as well.

Safe travels to those leaving the District to see family and friends over the next couple of weeks. Happy holidays and best wishes for a joyous, peaceful, and justice-filled New Year. We’ll see you in 2016!