Councilmember Silverman urged fellow Councilmembers to vote 'no' on the Mayor's and Chair's District of Columba Housing Authority Stabilization and Reform Act.

Let me read a paragraph that might sound familiar: “Disrepair of units, rampant crime…continue to erode living conditions for the 30,000 residents of 60 public housing developments….About one-fifth of the 11,796 public housing dwellings in the District are vacant and in need of significant repairs.”

And what does this story say? The Mayor argues about forward motion, important and meaningful reforms. And here we are, 30 years later, same situation.

We’ve known about deplorable housing conditions and DCHA dysfunction for decades. The alarm has been on since 1994, but we tune it out except when the press amplifies it. 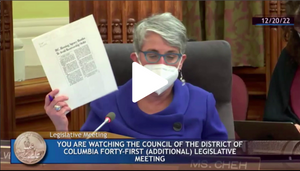 And then we do the same thing again and again: We make some quick fixes. Time and again, such as in this article, it is pointed out that a problem is having a board in the hands of the mayor. DCHA has a specific mission to house our lowest-income residents, and it needs an independent board focused on that mission. This plan is designed to move the authority out of the Board’s hands and squarely into the Mayor’s. That’s what this story said was wrong 30 years ago. Why do we keep repeating the same mistake again and again?

Now I am grateful that HUD came, however that happened, because the alarm about DCHA needed a much higher decibel level. This is not just about property management or sound financial and procurement practices. It is about providing safe, sanitary, dignified housing for people in our city who really need it.

There’s no argument that DCHA’s Board of Commissioners needs to have subject matter expertise to execute its responsibilities. And the ANS that we’ll be discussing has made improvements to the Mayor’s proposal: It has added reports to the Council, listening sessions with residents, and monthly Board reviews of the HUD assessment. The problem is that this is basically what the Board has to do according to HUD and according to our October emergency bill that this body unanimously voted for.

Actually, the HUD report says the Board should be getting weekly reports, not monthly reports!

The amendments take a flawed idea and make it a little better. But that’s not the same as doing real reform.

Let’s not cross our fingers this time. Every person and organization that has been following DCHA closely says to vote no on this emergency: The consortium of legal services providers, the Office of the Attorney General, and many, many DCHA residents to name some.

There is an alternative: Councilmember Pinto and I have proposed a major overhaul.

Here is the choice:

I’ll be voting no because I can’t read this story in the paper again.