D.C. Councilmember Elissa Silverman (I-At Large) released the following statement after The Atlanta Journal-Constitution published an article revealing that the D.C. Department of Employment Services (DOES) Director Odie Donald II interviewed to be the city manager of South Fulton, Georgia on Tuesday:

"Last night, I learned from an article in The Atlanta Journal-Constitution that DOES Director Odie Donald II was hired to be the South Fulton, GA, city manager after its city council publicly interviewed Donald by Skype and cast a majority vote in support of his hiring.

It was disappointing to read because Director Donald's likely departure comes at a time when leadership at the agency is critical. Despite our growing economy, unemployment and underemployment, particularly in neighborhoods east of the Anacostia River, remain stubbornly high. As D.C.'s lead jobs agency, DOES is essential to helping close this opportunity gap and therefore lessen our income inequality. For the $150 million dollars we spend on workforce development every year, we need to measure how successful we are at getting District residents not just jobs but living wage careers. Additionally, I was working with Director Donald on strategic enforcement of our labor laws, so that the agency focused its resources on holding bad employers accountable and making sure our workers get paid fairly.

We can’t keep doing what we’ve been doing. This is very clear. We are at a point where none of us want to be: We are without a permanent leader for DC public schools. We have no deputy mayor for education to help make us a true education system out of our bifurcated tracks right now in which half our students are in traditional schools and half are in public charter schools. We know that some of our students don’t come to school on time or at all; we are graduating students who are not prepared for higher education, the world of work or adult life in general; and we have a central office that is either unequipped to do the necessary oversight and accountability or has looked the other way. There is a culture of doing whatever it takes, including cooking the books and fudging the numbers, to show student improvement.

“I am glad Chancellor Wilson decided to step aside, because our focus needs to be on how we make DC public schools a great option for every school-age family in our city. His resignation is in the best interests of the District and the thousands of students who attend DC public schools.

"After discussion with parents, teachers, colleagues, and with Chancellor Antwan Wilson himself, I believe it is in the best interests of the District for the chancellor to resign, effective at the end of the 2017-2018 school year. I encourage the Mayor to begin a search for a new chancellor immediately. First, let me say that I wish the best for Chancellor Wilson, his wife, and especially his children.

This is another damaging blow to DC public schools and confidence in its leadership.

I’ve already received emails from parents exasperated by Chancellor Wilson’s apology. A lot of the irritation is because the chancellor faced a dilemma encountered by many DC public school parents: He felt his neighborhood school did not meet the needs of his child. The chancellor’s solution was to break a policy written by him that would not allow public officials preference in school placements. This was put into place by Chancellor Wilson himself after a school lottery scandal became public less than a year ago, in which top DC government officials were found to have received special treatment from his predecessor.

That he would ignore his own policy is indefensible, and it is even more galling that he would wait until he was caught by the DC Inspector General to admit this to the mayor. I understand Deputy Mayor Jennie Niles helped the chancellor bypass the lottery process, and she has resigned. Mayor Bowser has reiterated her confidence in the chancellor, but given his actions, I question his decision-making and leadership. 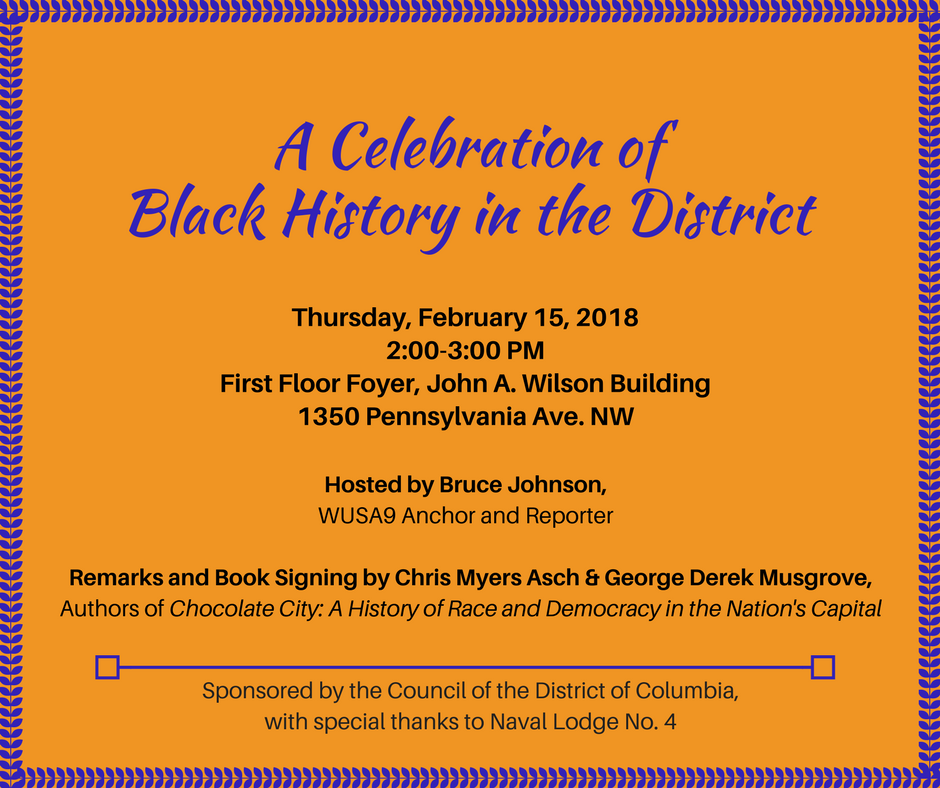 As we jump into Black History Month, I’m thrilled to extend an invitation to the second Celebration of Black History in the District happening next Thursday, February 15, from 2:00-3:00pm at the John A. Wilson Building (1350 Pennsylvania Ave. NW)! This year’s program will be emceed by WUSA9’s Bruce Johnson with keynote remarks by Chris Myers Asch and George Derek Musgrove, authors of Chocolate City: A History of Race and Democracy in the Nation’s Capital. We’ll also be joined by choirs from the Washington School for Girls and Wilson High School.

If you’re able to make it, then you will also get to meet the newest member of my staff. I’m excited to welcome Velonte Chambers as anintern in my office this semester. Velonte is a current DC Public Schools high school senior who is passionate about community outreach, equitable development, andyouth civic engagement. You may have heard about him on WAMU after his winning speech at the Mikva Challenge Project Soapbox competition last December. I was a judge at that competition and was immediately impressed by his charisma, confidence, and authenticity.

“I've heard horror stories from District homeowners about cracked foundations, flooded basements, and years of battling contractors who refuse to take responsibility for careless work,” said Silverman. “Homeowners must have reliable protections against property damage, and we can better reward good developers who do quality work.”

“The District’s Department of Consumer and Regulatory Affairs needs a significant overhaul. It is vital to protecting the health and welfare of our residents, as well as our businesses and our economy. That’s why I am an enthusiastic co-introducer of Chairman Mendelson’s bill today, the Department of Buildings Establishment Act of 2018, to break up DCRA into two agencies.

Take just these last four days: D.C. Fire and Emergency Medical Services (FEMS) crews have been called to fight fires that were caused by contractors either unlicensed or without proper permits. The violations were so obvious that FEMS could identify the problem almost immediately. These fires are further examples of the ways that DCRA puts our residents and businesses at risk.

The legislation comes in response to the recently passed federal tax reform bill limiting District income and property tax deductions for residents at $10,000.