“A recent study showed that nearly half of the individuals who have their licenses revoked lose their jobs as a result. Not to mention those who need a car for critical errands, like caring for seniors or children, but are often forced to risk a felony charge for driving without a license just to see after their families,” said Silverman.

Existing District law allows the Department of Motor Vehicles (DMV) to suspend a person’s driver’s license for any unpaid government-issued ticket over $100, only reinstating the license once the bill is paid. This legislation aims to protect lower-income residents and working families who are not able to pay the ticket by setting income limits for license suspensions, reinstating licenses for eligible residents, and ending license suspensions as a tool for private debt collection.

Today, D.C. Councilmember Elissa Silverman (I-At Large) introduced legislation to enhance the Marion S. Barry Summer Youth Employment Program (MBSYEP) by making life skills a centerpiece of the work experience, ensuring age-appropriate job placements, streamlining the application process, and reserving program slots for older youth who are not in school or working. It is part of her ongoing effort to create career pathways, build a future D.C. workforce that can meet the needs of our high-demand industries and small business employers, and build a strong pipeline for District residents into living wage careers.

“D.C.’s Summer Youth Employment Program has been the first job for generations of Washingtonians. It remains a seminal experience, and it has the potential to be one of the first and most influential opportunities to put our young people on a path to a successful career and a prosperous life,” said Silverman. “That was Mayor Barry’s vision, and this bill will help us fully realize that.”

The draft agenda and witness list are attached here.

In October, the Office of the City Administrator released a report called "Implementing Paid Leave: An update on the implementation of the Universal Paid Leave Amendment Act of 2016."  The report provides an update on the work underway by the Administration to implement the paid family leave law passed by the Council in 2016.  It details updates on program administration, staffing, office space, outreach, and IT procurement.

You can read the report here.

First thing: Join me this Saturday morning to ride the

Anacostia Riverwalk Trail! If you participated in last year’s Veterans Day bike ride, you know that fall is one of the most beautiful times to get some exercise and enjoy our urban outdoors! Like last year, we’ll be joined by the Washington Area Bicycle Association (WABA) and members of the Bicycle Advisory Council (BAC) to ride through the Kenilworth Aquatic Gardens and explore Bladensburg Waterfront Park! As long as the rain holds off, we’ll be leaving at 10:30 a.m. from the Capital Bikeshare station at 19th Street SE and East Capitol Street SE in front of RFK stadium. You can find more information and RSVP here. Fingers crossed that the 60-degree forecast holds! Thanks to Ashley Fox in my office, WABA, and our office’s BAC member, Jeff Johnson, for coordinating the ride.

On to other athletic feats: Baseball season is over, but 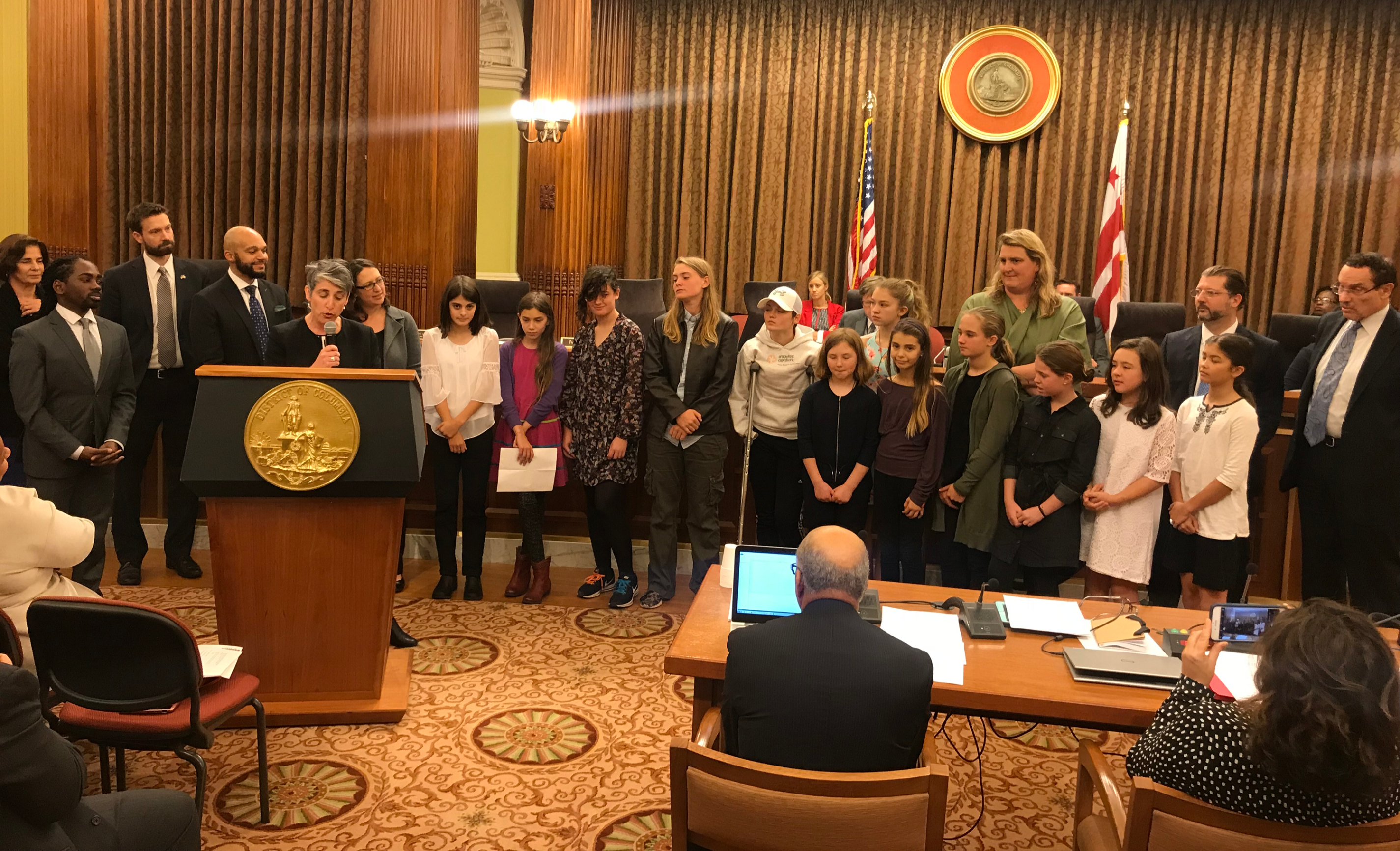 you might not know that DC brought home a championship! This month I had the privilege of presenting a ceremonial resolution to DC Force, the Washington area’s first all-girls baseball team, and their coach, to celebrate their recent success at this year’s Girls Baseball National Championship. Members of the 11u team came in fourth place, and members of the 13u team took the title of 2017 Girls Baseball National Champions!

At the DC Council legislative meeting on November 7, 2017, Councilmember Silverman moved an amendment to legislation that would authorize the creation of the Union Market Tax Increment Financing (TIF) area.  The amendment is pretty simple: it moves $36 million in the TIF that would pay for parking to instead fund more affordable housing and transit at the site.  The other $46 million in the TIF legislation, which is earmarked for infrastructure improvements, would not be affected by the amendment.

The FAQs and responses below can be downloaded here.

Next Weekend - Ride the Anacostia Riverwalk Trail with Me! 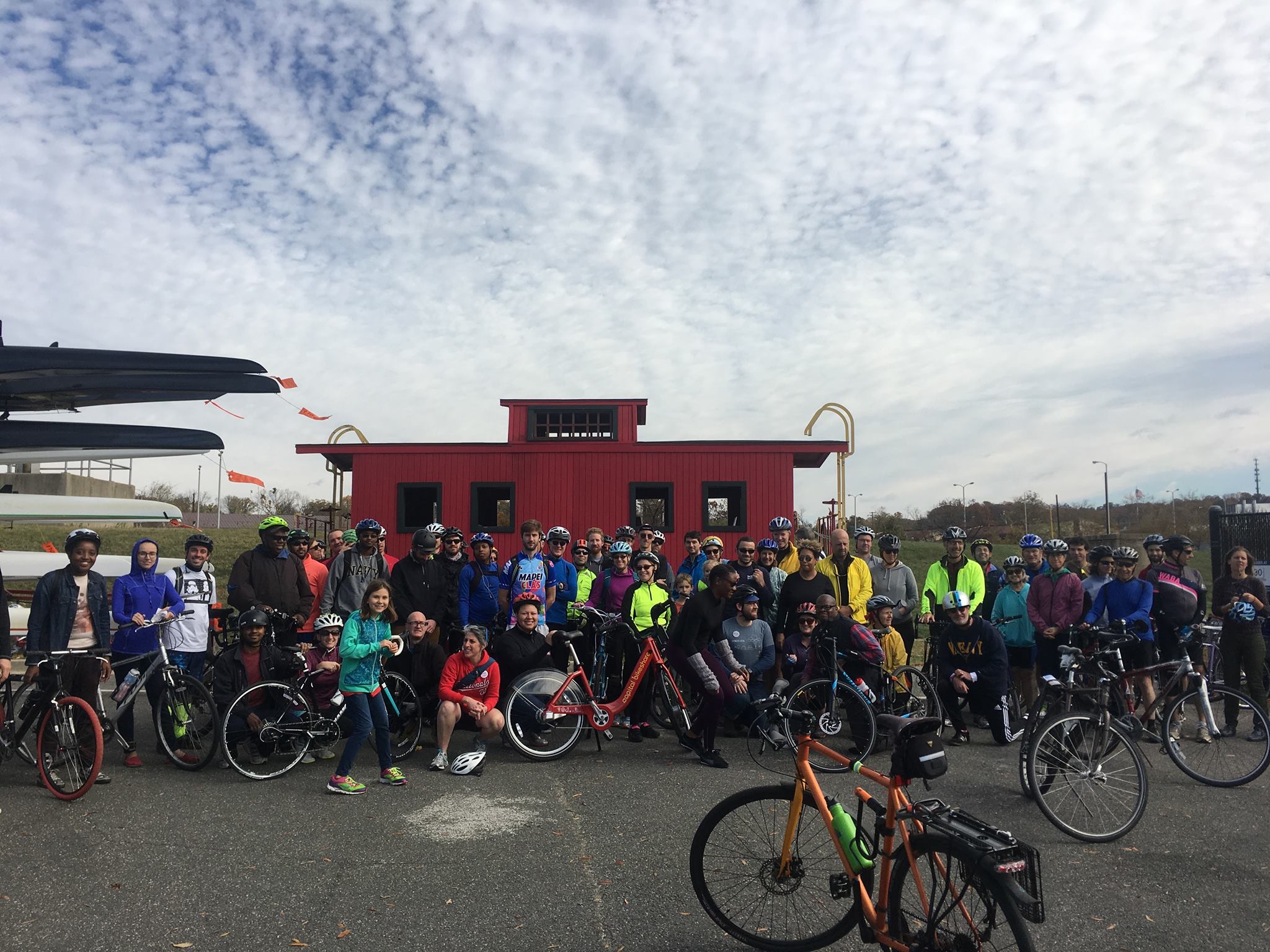 (WABA), then you know that fall is one of the most beautiful times to enjoy the Anacostia Riverwalk Trail. That's why I'm teaming up with WABA and our Bicycle Advisory Council for another fall ride this year!

Join us on Saturday, November 18 at 10:30am to ride through the Kenilworth Aquatic Gardens and explore Bladensburg Waterfront Park. We'll be leaving from the Capital Bikeshare at the DC Armory (2001 E Capitol St SE), so you can plan to use a bike-sharing option if you don't have your own bicycle. All skill levels are welcome and parking is available at the RFK Stadium lot nearby.

You can find full bike ride details and RSVP to join me here.

Now I'll be honest, the forecast for next Saturday looks iffy. If it still looks questionable throughout next week, we'll make the decision to cancel and update you next 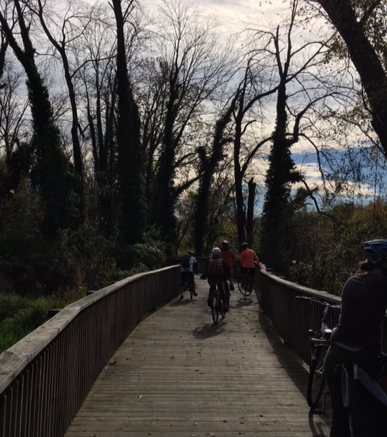 Friday. And if we have to cancel, then we'll try again in the spring! In fact, I'm looking forward to making my Friday afternoon bike rides from the Wilson Building open to the community in the spring too. A few Wilson Building colleagues recently started joining my ride around noon to loop Hains Point and pit stop for lunch on the Wharf Waterfront. The more the merrier, so I'll let you know when I have a few ride dates on my spring calendar!

I'll be sending a pretty jam-packed newsletter early next week, but as we head into Veterans Day weekend I'll be taking time to pay my respects to our veterans who have helped preserved the safety and freedoms that I regularly enjoy.

Hope to see you next weekend and Happy Veterans Day,

At-Large DC Councilmember Elissa Silverman released the following statement after a majority of the DC Council voted to disapprove an extension of a contract with Veritas of Washington LLC to operate United Medical Center (UMC) located in Ward 8:

“I want to thank a majority of my colleagues for voting to disapprove the Veritas of Washington LLC contract today. I especially want to thank Vince Gray, chair of the Committee on Health, for a thorough oversight process.

This contract didn’t pass the smell test. There are so many red flags about Veritas, not only from our experience at United Medical Center but also their performance at hospitals in New York City, Bermuda, Maryland and other places where principals of Veritas have done business in the past.

Residents of our city who use UMC for medical care deserve a quality, well-run hospital that puts patient care first. It became clear from hearings, personal testimony from UMC staff, and news reports that this is not the case with Veritas. The death of Warren Webb, detailed by the Washington Post, was shocking to read. Subsequent stories showed how key information on the case was omitted from reports to the DC Board of Health.

The Committee on Labor and Workforce Development will hold a public roundtable on the resolution to approve the recently negotiated Collective Bargaining Agreement between the Department of Behavioral Health and 1199 Service Employees International Union, United Healthcare Workers East MD/DC Region (PR 22-0531). The roundtable will be held on Thursday, November 2, at 11:30 am in Room 123 of the John A. Wilson Building (1350 Pennsylvania Ave. NW).

The draft agenda and witness list are available here.

On Wednesday, November 1, 2017, the Committee on Labor and Workforce Development will convene a public hearing to consider Bill 22-178, the “Commission on Poverty in the District of Columbia Establishment Act of 2017.” The hearing will begin at 1:00 p.m. in Room 500 of the John A. Wilson Building (1350 Pennsylvania Ave. NW).

The draft agenda and witness list are available here.